The Q4 earnings season has effectively come to an end for most of the major sectors, with the Retail sector as the only one that has a significant number of reports still awaited. It has been a positive and reassuring reporting season in the aggregate, with earnings growth on track to turn positive and an above-average proportion of companies beating top-line expectations. Estimates for 2020 Q1 have come down, but the magnitude of negative revisions still compare favorably to other recent periods despite the virus impact.

We will discuss what’s happening to current (and following) quarter estimates a little later, but let’s focus on the Retail sector for now which has a number of key operators like Home Depot HD, Macy’s M, TJX Companies TJX, Best Buy BBY and others on the docket this week. In total, we will get Q4 earnings reports from just over 700 companies this week, including 42 S&P 500 members. By the end of this week, we will have seen Q4 results from more than 95% of the S&P 500 members.

We typically associate the traditional brick-and-mortar operators as belonging in the retail space. But we have a stand-alone Retail sector (the official Standard & Poor’s classification puts the retail space in the Consumer Discretionary and Staples sectors) that not only includes the traditional players but also online vendors and restaurant operators.

For the Zacks Retail sector, one of the 16 Zacks sectors, we have already seen Q4 results from 20 of the 37 companies in the S&P 500 index. Total earnings for these Retail sector companies are +0.4% from the same period last year on +9.4% higher revenues, with 65% beating EPS estimates and 55% beating revenue estimates. The comparison charts below put these Retail sector results in a historical context.

This is a weaker showing than we have seen from other sectors this earnings season, but not in a major way. The coming Retail sector results are not expected to change this picture in a meaningful way.

The one Retail sector space that will be in the spotlight this week is the traditional department store industry. We will see what Macy’s and JC Penney JCP come out with in their reports, but the stock market performance of the stocks suggests that expectations remain very low. While the Retail landscape as a whole has been undergoing a secular shift in recent years as a result of changing consumer behavior and increased competitive pressures, particularly from the digital side, the department store space has truly been in pain.

Total earnings for these 438 index members are up +1.3% from the same period last year on +4.5% higher revenues, with 71.9% beating EPS estimates and 65.5% beating revenue estimates.

Looking at Q4 as a whole, combining the actual results that have come out with estimates for the still-to-come companies, total earnings are expected to be up +0.7% from the same period last year on +4.3% higher revenues. Excluding the Energy sector, Q4 earnings would have been up +4.1%.

Current period estimates are coming down, with the Coronavirus outbreak adding to the typical negative revision that would take place any way, as the chart below shows. 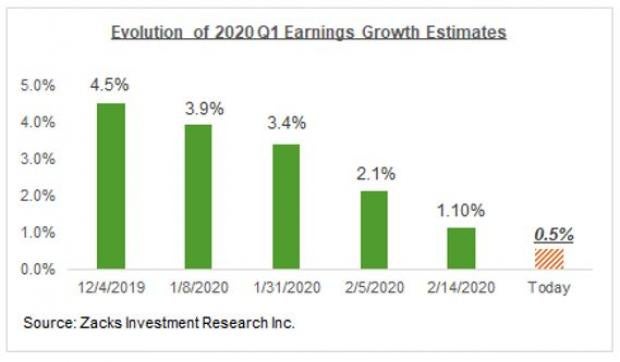 It is totally normal for current-period estimates to be coming down as companies release their quarterly results and the magnitude of negative revisions to Q1 estimates still compares favorably to historical periods. But the additional factor this time around is the Coronavirus outbreak that has clear negative earnings implications, as many companies like Apple AAPL, Nvidia NVDA, Starbucks SBUX, and others have publicly acknowledged. The full extent of the virus outbreak will only become clearer over time. We don’t know at this stage whether the outbreak’s negative impact will be a one quarter phenomenon or will it seep into the following periods as well. 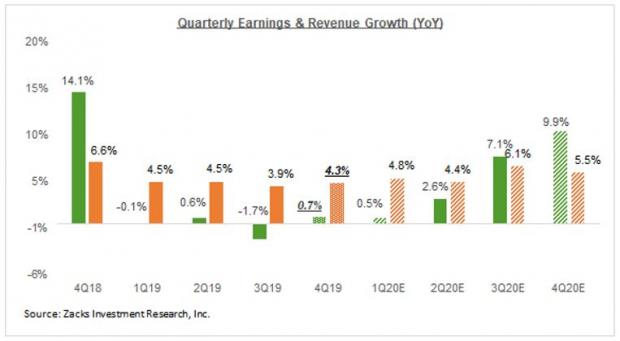 For an in-depth look at the overall earnings picture and evolving expectations for 2020 Q1, please check out our weekly Earnings Trends report >>>> Q1 Estimates Holding Up Despite Virus Impact