SolarEdge’s intelligent inverter solutions have helped change the way power is stored and managed within a solar photovoltaic system. Many people commonly refer to these simply as solar panels, but they are part of a larger solar energy capturing and converting systems that look poised to play a larger role as they become more efficient and affordable.

SolarEdge’s DC optimized inverter offerings are vital because they convert the variable direct current outputs of a PV solar panel into usable alternating current. The firm’s DC optimized inverters help to maximize power generation at the individual PV module-level. Plus, SolarEdge is able to help lower the cost of energy produced by the solar PV systems.

SEDG began selling its offerings on a commercial level back in 2010. Since then, its DC optimized inverter systems and its products have been installed in solar PV systems in over 130 countries around the world. And SolarEdge’s offerings are geared toward businesses, homeowners, solar professionals, and energy grid services.

As we mentioned at the top, SolarEdge topped our Q4 fiscal 2019 estimates last week. The firm’s 2019 revenue surged 52% billion, while adjusted full-year earnings soared 40% to $4.44 a share. “This year, we continued to expand our solar business and also made significant investments in our acquired businesses that open new opportunities for us to expand our product offerings into adjacent segments and leverage our highly talented technological teams to become leaders in those markets,” CEO Zvi Lando said in prepared Q4 remarks. 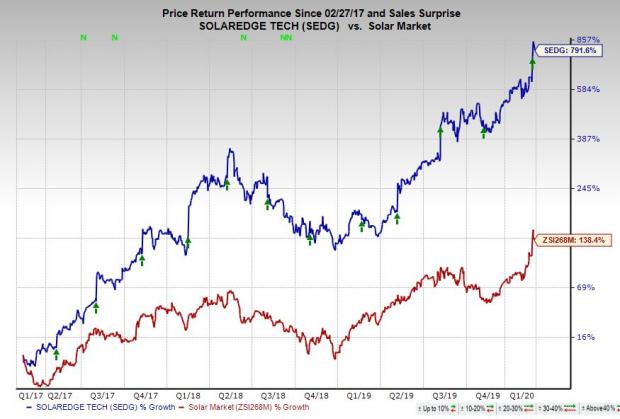 Investors can see in the nearby chart that SEDG stock has soared over the last three years, up nearly 800%, against the solar market’s 140% climb. SolarEdge did hit a rough patch between May 2018 until the start of 2019. Since then, however, SEDG shares have skyrocketed 300% to destroy fellow high-flyers such as Apple (AAPL - Free Report) and Nvidia (NVDA - Free Report) .

SolarEdge stock climbed after its Q4 release on February 19. But the stock has slipped as part of the broader market pullback recently, which might set up a better buying opportunity for those high on the stock that currently hovers around $134 a share.

Despite its industry-topping run, SEDG shares are trading at a discount compared to its industry in terms of forward 12-month earnings estimates and right near the S&P 500 when it comes to forward sales.

SolarEdge is also part of an industry that includes highly ranked Enphase Energy (ENPH - Free Report) and SunPower (SPWR - Free Report) . In fact, the Solar industry rests in the top 16% of the more than 250 Zacks industries.

Wall Street has gotten behind renewable energy stocks recently, which includes Tesla (TSLA - Free Report) . Plus, the traditional oil and gas-heavy Energy space has been the worst-performing sector of the S&P 500 for the last decade.

On an industry-wide level, the U.S. Energy Information Administration forecasts that generation from non-hydropower renewable energy sources, such as solar and wind, will grow by 15% in 2020. This would mark the fastest rate in four years, while coal-fired power plant generation is expected to decline by 13%.

Looking ahead, our Zacks estimates call for SolarEdge’s revenue to soar 59% in the first quarter to reach $431.2 million, which would match the fourth quarter’s growth.

Overall, the company’s fiscal 2020 revenue is projected to surge another 32% from $1.43 billion to hit $1.88 billion. This would mark the continuation of impressive top-line growth that has seen it climb all the way from $607 million in 2017.

SolarEdge’s earnings estimates have also soared since it posted its Q4 results. These positive revisions help SEDG earn a Zacks Rank #1 (Strong Buy). The stock also holds an “A” grade for Growth and a “B” for Momentum in our Style Scores system.

Plus, the company helped ease investor worries about potential setbacks at its factory in China on its recent earnings call. “Regarding the delivery of products, we do not expect any disruption to our revenue in Q1 or Q2,” the company’s CEO said.

“As is to be expected, we may experience some level of continued air shipment in order to meet the growing demand for our products.”

Bull of the Day: Alarm.com (ALRM)