What to Expect from Big Bank Earnings Amid the Coronavirus?

The large money-center banks that will kick-off the 2020 Q1 earnings season for the sector this week have been hit hard in the ongoing downturn.

As you can see in the chart below, JPMorgan and Bank of America have done better than the industry, but even they lag the broader market in a big way. 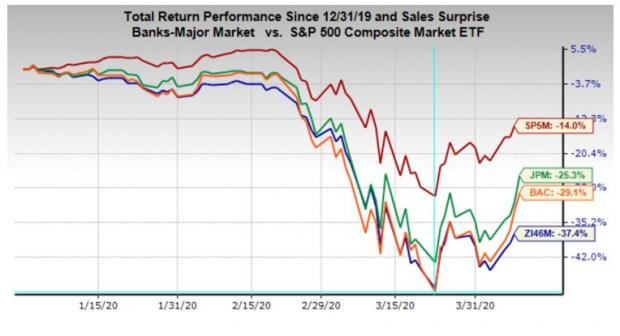 This underperformance is not surprising, given the group’s exposure to what is expected to be a sharp downturn in economic activities in the current period. Banking is after all a cyclical business, with the demand for credit and investment banking services strongly correlated with GDP growth. The group also suffers in a downturn from deterioration in credit conditions that has a direct bearing on the quality of its assets (loan portfolios) as borrowers struggle to service their obligations.

That said, this is not your typical economic downturn, resulting from imbalances in parts of the economy or Fed action. This is an engineered event, necessitated by the need to stop the spread of the virus. As such, it is reasonable to expect ‘normalcy’ to resume once we get some visibility on the underlying public health issue.

The policy response to the pandemic and associated economic downturn has been swift and powerful, which should help taking edge off the economic pain, both for households as well as businesses.

We are starting to see some optimism in recent days about the pandemic, which is driving the stock market rebound. But it’s fair to say that a lot still remains unclear.

With respect to banks’ Q1 earnings, and also with companies in other industries/sectors, the important elements wouldn’t be so much the numbers for the March quarter, but rather the evolving outlook for the current (2020 Q2) and following quarter. To that end, it is hard to envision any management team having the visibility to offer useful guidance. In fact, we would expect the recent trend of companies withdrawing existing public guidance to be the norm, rather than the exception.

The set up for bank earnings is tough, with margins under renewed pressure because of Fed policy. The full extent of the Fed’s emergency rate cut will show up in Q2, but net interest margin will be flat at best for most of these banks. Loan portfolios likely expanded in Q1, particularly on the C&I side, as companies used up existing revolving credit facilities. At the same time, we should brace ourselves for growing loan-loss provisions this quarter, though the full extent of that will really show up in the current and following quarter.

The group stands to benefit from the small-business loan/grant provisions of the fiscal relief measure, but we wouldn’t see that in Q1 results.

With respect to investment banking, deal activity is down, both for M&A deals as well as IPOs, but debt issuance likely expanded. Trading revenues likely benefited from record volatility as well as volumes, which we will see in the result from all the money center players as well as the brokers.

All in all, the group is in excellent financial shape, in terms of capital cushions. But questions about the group’s dividends remain.

The group’s profitability picture is not expected to improve in the current and coming quarters either, as the quarterly earnings and revenue growth picture below shows. 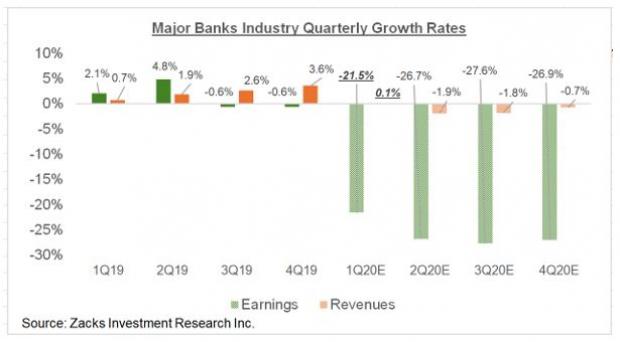 For the Finance sector as a whole (Major Banks industry brings in roughly 45% of the sector’s total earnings), total Q1 earnings are expected to be down - 7.1% on +1.8% higher revenues.

The Q1 earnings season is unlikely to give us clarity on the pandemic’s full earnings impact. The reason for that is these companies are as much in the dark about the economic horizon as the rest of us.

The clouds will start lifting once we gain visibility on the pandemic’s duration, which hit Q1 only partially and is expected to ‘peak’ sometimes towards the end of this month or next. The hope is that the worst takes place in Q2, with normalcy returning in Q3 and beyond. We have been seeing the effect of this outlook in how estimates have evolved in recent days and weeks, as the charts below

The first chart is showing how growth expectations for 2020 Q1 have evolved since the quarter got underway. 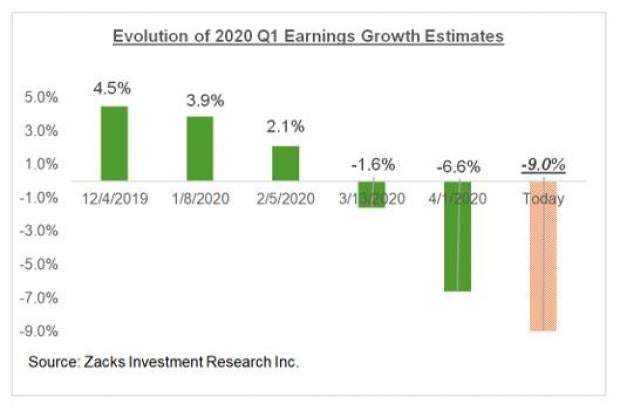 As bad as the Q1 revisions trend above looks, the situation is worse for the current period, as the chart below shows. 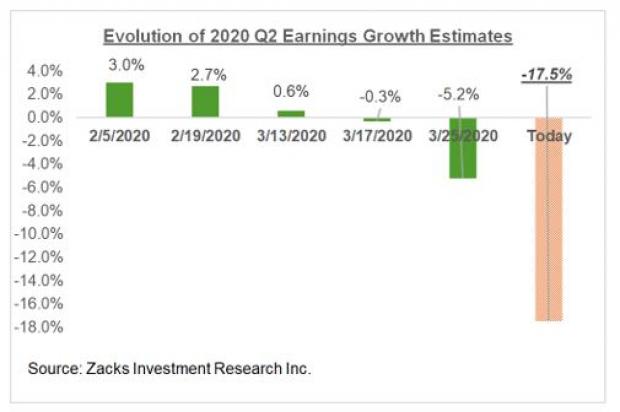 The chart below looks at Q1 expectations in the context of what was achieved in the last few quarters and what is expected beyond 2020 Q1. 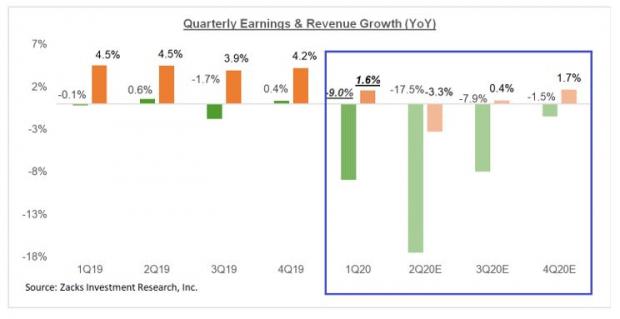 As you can see above, all four quarters this year are now in negative territory. We haven’t seen a lot of changes to estimates for next year, which is understandable given the all-around lack of visibility

The chart below puts earnings and revenue growth expectations for full-year 2020 in the context of where growth has been in recent years and what is expected next year. 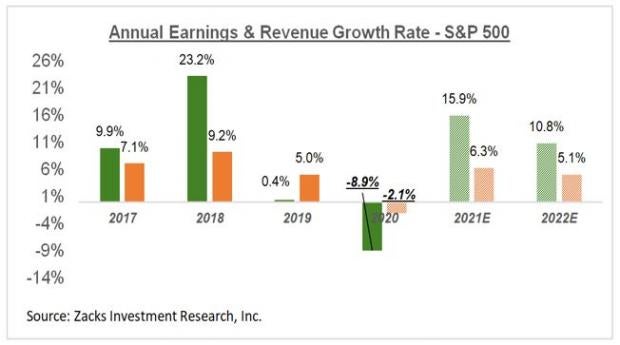 You can see here that full-year 2020 is now in the negative, both for earnings as well as revenues, primarily reflecting the pandemic’s impact. Growth is expected to resume next year and continue the following year.

The aforementioned JPMorgan and Wells Fargo (WFC - Free Report) reports would not really be the first Q1 results, as the reporting cycle has ‘officially’ got underway already, with results from 21 S&P 500 members out at this stage. All of these companies have reported results for their fiscal quarters ending in February, which we count as part of our March quarter tally. These early reporters include a number of bellwethers like FedEx (FDX - Free Report) , Nike (NKE - Free Report) , Costco (COST - Free Report) and others that follow this reporting format.

Total earnings or aggregate net income for these 21 index members that have reported already are down -10% from the same period last year on +5.1% higher revenues, with 76.2% beating EPS estimates and 71.4% beating revenue estimates.

The comparison charts below put the results from these 21 index members in a historical context. The first set of two charts compare the earnings and revenue growth rates for these companies.

The second set compares the proportion of these companies beating EPS and revenue estimates.

For Q1 as a whole, combining the roughly two dozen companies that have reported results already with estimates for the wide majority of still-to-come results, total earnings are expected to be down -9% on +1.6% higher revenues.

The table below shows the summary picture for Q1, contrasted with actual results in the preceding period. We have underlined the sectors with the biggest declines in Q1. 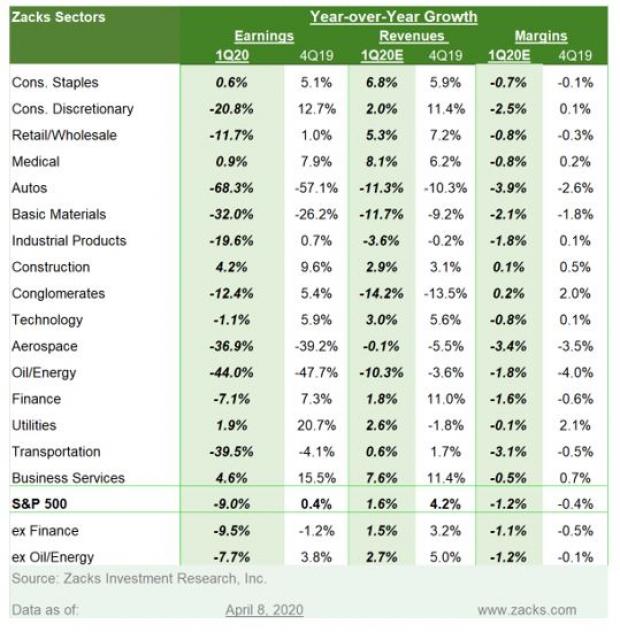 For an in-depth look at the overall earnings picture and expectations for Q1, please check out our weekly Earnings Trends report >>>>Taking Stock of the Earnings Picture Amid the Coronavirus Pandemic 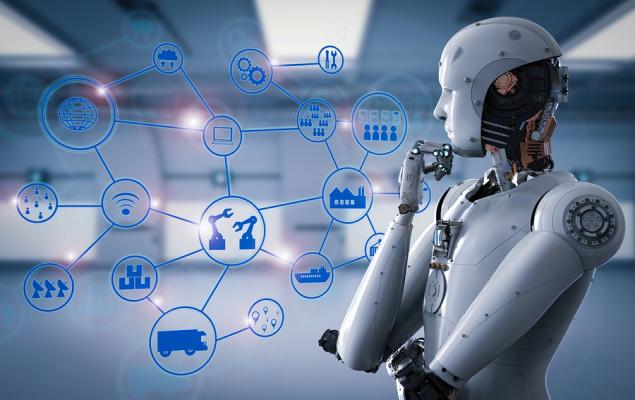 Is the Market Ahead of Itself?