We will dig deeper into current market expectations for the Tech sector a little later, as we first want to give you a real-time update on the Q1 reporting cycle.

As of Friday, April 24th, we have seen Q1 results from 122 S&P 500 members or 24.4% of the index’s total membership. With another 154 index members on deck to report results this week, we will have crossed the halfway mark by the end of this week.

Total earnings or aggregate net income for these 122 index members that have reported already are down -16.2% from the same period last year on +2.5% higher revenues, with 64.8% beating EPS and 63.1% beating revenue estimates.

Had it not been for the Finance sector drag, Q1 earnings growth for the remaining S&P 500 companies at this stage would have been positive, thanks largely to strong results from Intel (INTC - Free Report) whose Q1 earnings and revenues were up +54% and +23.5% from the year-earlier levels, respectively.

The comparison charts below put the results from these 122 index members in a historical context. The first set of two charts compare the earnings and revenue growth rates for these companies.

The second set compares the proportion of these companies beating EPS and revenue estimates.

The earnings growth comparisons start looking a lot better when seen on an ex-Finance basis, as the comparison chart below shows. 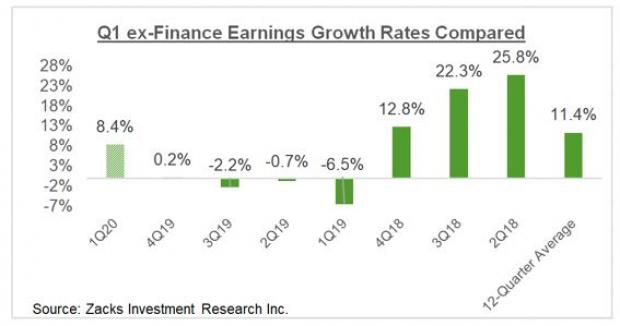 For Q1 as a whole, combining the 122 companies that have reported results already with estimates for the wide majority of still-to-come results, total earnings are expected to be down -15.3% on +1.2% higher revenues.

The table below shows the summary picture for Q1, contrasted with actual results in the preceding period. We have underlined the sectors with the biggest declines in Q1. 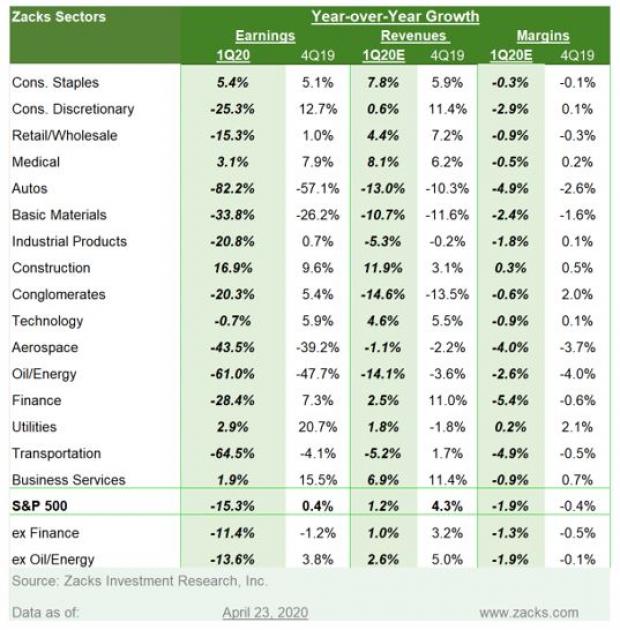 Please note that unlike the earnings growth pace for the reported companies which looks materially different on an ex-Finance basis, the blended or combined Q1 picture doesn’t change much, as you can see above. Excluding the Finance sector, Q1 earnings for the index is on track to be down -11.4% on +1% higher revenues.

Expectations for the Tech sector

In terms of Q1 earnings and revenue growth rates, the Tech leaders reporting this week are expected to show.

Apple (AAPL - Free Report) – The iPhone maker’s earnings are expected to show a -20.4% decline on -7.9% lower revenues when it reports after the market’s close on Thursday, April 30th.

Amazon (AMZN - Free Report) – Amazon’s earnings are expected to drop -11.7% from the year-earlier period on +23% higher revenues when it reports results after the market’s close on Thursday, April 30th.

Facebook (FB - Free Report) – Facebook is expected to report results after the market’s close on Wednesday, April 29th, with earnings and revenues expected to be up +102.1% and +14.7% from the year-earlier level, respectively.

Microsoft (MSFT - Free Report) – Microsoft is on deck to report Q1 results after the market’s close on Wednesday, April 29th, with earnings and revenues expected to increase by +9.9% and 10.7% from the year-earlier levels, respectively.

For Tech sector as a whole, Q1 earnings are expected to be down -0.7% on +4.6% higher revenues. The chart below shows the sector’s Q1 earnings and revenue growth expectations in the context of where growth has been in the preceding four quarters and what is expected in the following three periods.

This is a far better growth picture than these growth percentages would suggest, particularly when viewed in the context of what’s happening in other sectors.

To get a sense of that context, take another look at the Q1 earnings growth column on the summary table you saw a little earlier. What you see in that table is that 10 of the 16 Zacks sectors are expected to suffer double-digit earnings declines in Q1. The Finance sector, the second biggest earnings contributor in the S&P 500 index is expected to suffer a -28.4% decline in earnings in Q1.

In fact, it is reasonable to expect that the Tech sector’s Q1 earnings growth pace will most likely be positive, if Apple or Google has better than expected numbers this week.

With most economic activity at a standstill and millions of Americans losing jobs, the economic growth backdrop in the current period (2020 Q2) is very bad. We are seeing this in earnings estimates, which are falling sharply.

To get a sense of this evolving earnings picture, take a look below at how earnings estimates for the June quarter have evolved over the last couple of months. 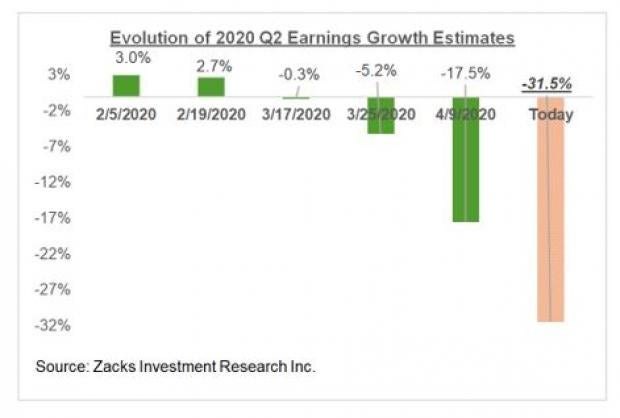 As you can see above, the negative revisions trend has accelerated in recent days, a trend that we expect to see continue as more companies report Q1 results and discuss trends in their businesses. We are seeing something similar at play in estimates for full-year 2020 as well, as the chart below shows. 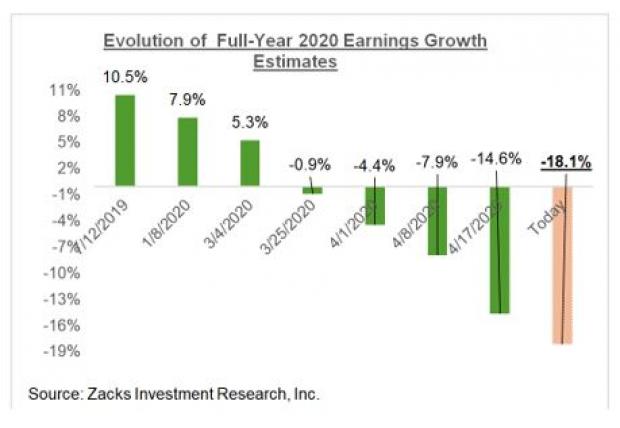 The chart below puts full-year 2020 earnings and revenue growth expectations in the context of where growth has been in recent years and what is expected beyond this year. 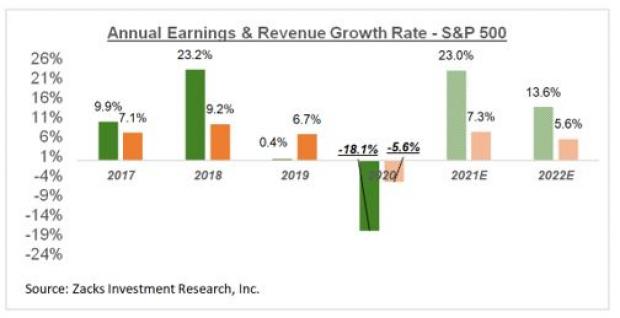 As you can see here, current estimates reflect a strong rebound in growth next year and beyond. But it is hard to have a lot of confidence in these expectations as long as the public health issue remains unsettled.

For an in-depth look at the overall earnings picture and expectations for Q1, please check out our weekly Earnings Trends report >>>>Making Sense of the Earnings Picture During the Coronavirus