Bull of the Day: AbbVie (ABBV)

For obvious reasons, the HealthCare sector has been extremely resilient during the Covid-19 shutdown, having given up just a bit over 3% over the past three months versus losses of 10-30% in many other segments of the broad equity markets.

Although it seems like a distant memory now, HealthCare stocks also got a boost when former Vice-President became the presumptive Democratic nominee for President and Senators Bernie Sanders (D, VT) and Elizabeth Warren (D, MA) dropped out of the race. Sanders and Warren had been promising sweeping changes to the US Healthcare systems that were likely to significantly impair profits in the industry. A Biden Presidency would instead likely be very close to the status quo.

After a recent acquisition, AbbVie (ABBV - Free Report) has become a true powerhouse in the pharmaceutical industry with a stable of therapeutics spanning a wide variety of illnesses as well as a strong R&D pipeline. The recent closure of a $63 billion deal to purchase Allergan means AbbVie now owns the popular Botox brand – the world’s best-known cosmetic treatment.

(Botox also has non-cosmetic applications such as relief from migraine headaches, but it’s most commonly thought of as a facial wrinkle treatment.)

Many pharmaceutical companies are currently performing research into vaccines and therapeutics aimed at Covid-19.  Other than donation of pharmaceutical supplies to health officials around the globe for use in clinical trials, AbbVie is not directly involved in Covid-19 vaccine research.

That’s not necessarily a bad thing. Because of the severity of the outbreak and the enormous effect it has had on public health and the economy, Covid-19 has been getting virtually all of the available media coverage, but a vaccine isn’t likely to be a huge moneymaker for the companies who are able to develop one.

That research is closer to a public service than an attempt to develop a traditional blockbuster drug. We’re all hoping for swift and immediate success and applaud those who are tirelessly performing the research, but it may not turn out to be an investable opportunity.

In the meantime, many other common conditions continue to threaten the health of tens of millions of people, even if they aren’t currenty getting much attention. Cancer, Alzheimer’s, Parkinson’s, Auto-immune disorders like Rheumatoid Arthritis and Psoriasis, Hepatitis C and on and on.
AbbVie has approved treatments or drugs in the pipeline for all of these afflictions and many more.

The company is particularly well-known for their development of oncology treatments. A look at the “Pipeline” segment on the company's website shows that they have a total of 36 cancer medications that are either available for sale or in clinical trials.

Many biotech and pharmaceutical companies have a small number of products (as few as one) that represent a hit or miss proposition for potential investors. They have no current earnings, burn cash and their futures product are either going to work or they’re not, but with no scenarios in between. Many of them never end up making any money.

AbbVie earns $11/share and pays investors a 5% dividend yield, while still providing the growth potential of new treatments in development.

In addition to developing life-changing treatments, AbbVie also happens to be a very well-managed company. For instance , the blockbuster drug Humira will lose US patent protection in three years, threatening the $20 billion in annual revenues it has produced for AbbVie if generics become available.

AbbVie has developed a replacement treatment called Skyrizi that offers significant benefits to Psoriasis patients that provides superior relief with less frequent injections. Management of the patent and replacement cycle is a hallmark of the most successful biotech companies.

You don’t want to own a “one-trick pony,” you want to see the deepest possible bench of current and future products.

We’ve certainly all heard of Botox. Despite the benefits for some patients mentioned earlier, it’s most well known as a cosmetic treatment, used to reduce the appearance facial wrinkles. It also needs to be injected by a licensed physician and the effects are not permanent. Patients need to return every few months for follow up treatments to maintain the smooth facial appearance they desire.

That makes it a beautiful product from a sales perspective. It’s inaccurate to refer to Botox as “addictive” because it doesn’t the potential to produce any sort of physical or psychological dependence, but the patients who like the results they get from it tend to come back over and over for more.

The $63 billion price tag for Allergan raised a lot of eyebrows in the analyst community and added significant debt to the balance sheet. The deal also unfortunately closed this month – during a period of time when many of the facilities that perform cosmetic procedure aren’t even open.
Allergan did extensive data research on their customers and found it likely that they would be minimally affected by recent shutdowns. More than 50% of patients come from households with incomes over $150k, the vast majority work for large businesses rather than the small operations that have been disproportionately affected and 80% of those surveyed said their demand for cosmetic procedures wouldn't be meaningfully affected.

In fact, it seems possible that millions of people who have been mostly confined to home are going to contribute to sharply increased demand for cosmetic products once they are set loose.
With the 2020 Zacks Consensus Earnings Estimate rising from $9.38/share to $11.01/share in the past 30 days, AbbVie earns a Zacks Rank #1 (Strong Buy).

There’s a lot of uncertainty right now across a broad swath of industries, but a well-managed Pharmaceutical company with a great product mix and pipeline is especially well-suited to weather the storm.

5 Stocks Set to Double Each was hand-picked by a Zacks expert as the #1 favorite stock to gain +100% or more in 2020. Each comes from a different sector and has unique qualities and catalysts that could fuel exceptional growth. Most of the stocks in this report are flying under Wall Street radar, which provides a great opportunity to get in on the ground floor. Today, See These 5 Potential Home Runs >> 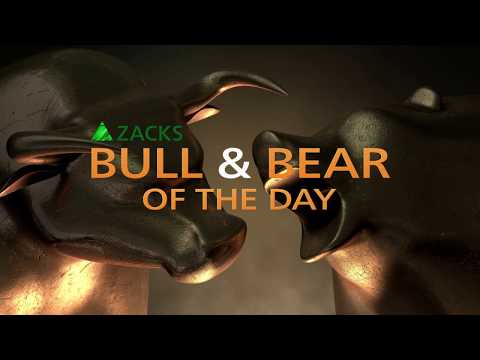