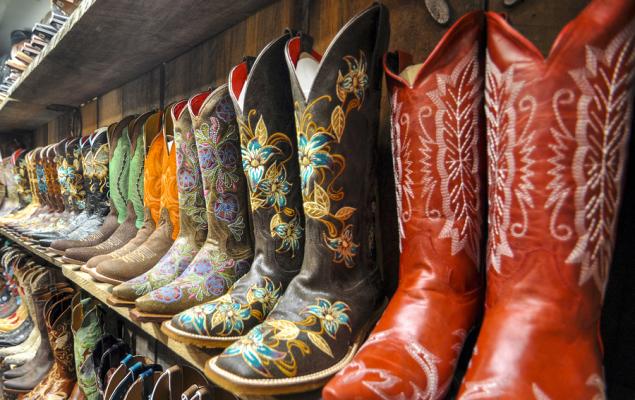 Boot Barn Holdings, Inc. (BOOT - Free Report) managed to keep most of its stores open as an essential business during the coronavirus shutdowns. But this Zacks Rank #5 (Strong Sell) is still facing difficult economic conditions as the consumer focuses only on essential goods.

Boot Barn is a specialty retailer of western and work-related footwear, apparel and accessories for men, women and children. It operates 260 stores in 35 states, with Texas being its largest market. It also operates several e-commerce sites including www.bootbarn.com, www.sheplers.com and www.countryoutfitter.com.

A Miss in Fiscal 2020 Fourth Quarter

On May 20, Boot Barn reported its fiscal 2020 fourth quarter and full year results and missed on the Zacks Consensus in the quarter by $0.12. Earnings were just $0.18 versus the consensus of $0.30.

The quarter was on track for another positive comparable until COVID-19 hit in March.

In the third week of fiscal March, same-store-sales turned negative, declining 8%. They were down more than 50% in the final two weeks of the quarter as various state shutdown.

However, unlike some other specialty retailers which were among those ordered to close when the states started shutting down businesses, Boot Barn was considered an "essential business" in many states due to the workwear apparel and shoes that it sells, including scrubs for the medical profession, and could keep its stores open.

The vast majority of its stores have remained open but are operating at reduced hours and have seen a big decline in traffic.

Was March the Worst of the Coronavirus Impacts?

It has seen a steady increase in sales every week since the end of March, mostly in online sales, however.

But in April, same-store-sales were down 45% while the first three weeks of May were down just 14%.

Men's work boots and clothing were performing the best, with fashion styles lagging. Women's apparel and, to some extent, women's boots, were also slow.

No Guidance for Fiscal 2021

Like most companies, due to the uncertainty with COVID-19, the company did not provide any fiscal first quarter or full year 2021 guidance.

It also cautioned on its conference call that while its retail stores have remained open during the state shutdowns, many of its competitors, such as those in malls, have not.

It's unclear whether the turnaround in sales in the first 7 weeks of the fiscal first quarter will hold as competitors reopen.

Additionally, it will see impacts from the cancellation and/or postponement of important yearly events like Stagecoach music festival and the Houston Rodeo.

Boot Barn also has extensive business in the energy industry, especially for fire retardant clothing and boots. The energy industry is, obviously, struggling as oil has plunged and rigs have been shut.

The analysts have mostly already cut Boot Barn's fiscal 2021 and fiscal 2022 earnings estimates, even ahead of the earnings report.

In fact, at least one analyst cut too far, as one estimate was raised for this year in the week after the earnings report.

Boot Barn had been one of the hottest retailers on the Street in 2019 as same-store-sales popped.

But they've plunged 53% year-to-date, although they are off their worst lows of the year.

Are they a deal?

Boot Barn now trades with a forward P/E of 17, as those earnings estimates have fallen in conjunction with the share price. It's not expensive, but nor is it dirt cheap.

Boot Barn joins the list of other retailers that are seeing their earnings estimates slashed in 2020 thanks to COVID-19.

The group is under performing compared to the S&P 500 (IVV) year-to-date.

Investors in the specialty retailers might want to wait on the sidelines to see how the next few months shake out.

Bear of the Day: The Walt Disney Company (DIS)