Noble Corporation (NE - Free Report) released the latest fleet status update that included information about several new contract extensions and a termination. The contract extensions and new deals are major positives for the company, given the near-term market softness on account of low oil price environment, which is a significant threat to offshore drilling contractors.

The company’s drillship Noble Sam Croft is working with Apache Corporation (APA - Free Report) in Suriname. The contract is now expected to expire by mid-November 2020 as the client exercised an option well. Previously, the contract was set to expire by June 2020. The contract dayrate has not been disclosed by the company. Moreover, the drillship Tom Madden recommenced work on Jun 7 after being put on the standby rate since early-April.

Qatar Gas has provided the Noble Mick O'Brien jackup with a contract extension, which will likely conclude by mid-November. Earlier, the contract was set to expire in late August 2020. Another jackup, Noble Sam Hartley received a new contract from CNOOC Limited (CEO - Free Report) in the United Kingdom. The contract is likely to span from mid-August to the middle of this December at an undisclosed dayrate. The deal includes four one-well options.

The jackup Noble Sam Turner has received a one-well contract in the United Kingdom from France-based energy major TOTAL S.A. . The rig is expected to start work from late-August and finish the job within the latter part of September at an undisclosed dayrate.

Another jackup Noble Tom Prosser is expected to resume work, following a standby period in mid-July. Per the deal, which includes nine one-well options, the driller will work in Australia till October.

Currently, Noble Corp. has a Zacks Rank #3 (Hold). The company’s shares have popped 13.7% over the past three months compared with 18.6% rally of the industry it belongs to. 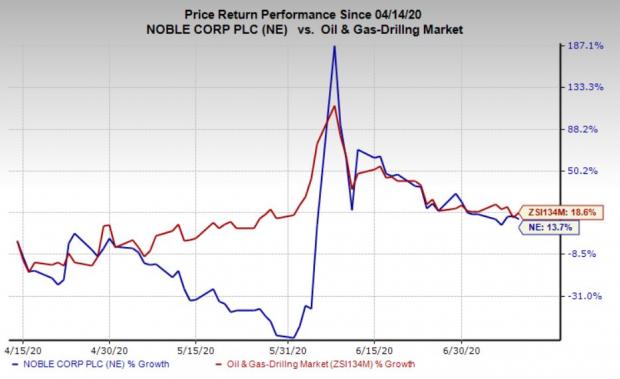