Barring one-time items, adjusted earnings in the reported quarter were $7.10 per share, which topped the Zacks Consensus Estimate of $5.69.

Sherwin-Williams posted revenues of $4,604 million, down roughly 6% year over year. However, the figure beat the Zacks Consensus Estimate of $4,556.2 million.

The decline in sales is due to the impacts of coronavirus pandemic, which led to weak demand in certain end markets in the Americas Group and the Performance Coatings Group segments. Unfavorable currency translation also hurt sales. These were, in part, offset by increased sales to most of the Consumer Brands Group unit’s retail customers.

The Americas Group segment registered net sales of $2.52 billion in the second quarter, down around 8% year over year, as coronavirus impacted demand in most end market segments.

Net sales in the Consumer Brands Group segment climbed roughly 22% year over year to $980.2 million. Increased volume sales to most of the segment’s North American and European retail customers were partly offset by weaker sales in Asia Pacific.

Net sales in the Performance Coatings Group fell nearly 17% year over year to $1.1 billion in the reported quarter. The decline was mainly due to weaker end market demand in most businesses partly resulting from the impacts of the pandemic. Sales were also affected by unfavorable currency swings. These were partly offset by higher sales in the packaging division in all regions.

At the end of the quarter, Sherwin-Williams had cash and cash equivalents of $188.1 million, up 29% year over year. Long-term debt increased around 15% year over year to $8,289.4 million.

The company purchased 1,700,000 shares of its common stock in the first half of 2020. It had remaining authorization to purchase 6.75 million shares through open market purchases.

Moving ahead, Sherwin-Williams envisions demand to improve sequentially in the third quarter with softness continuing in certain end markets in the United States and global environments for the balance of 2020.  The company expects third-quarter consolidated net sales to be up or down low single digits on a year-over-year basis.

Shares of Sherwin-Williams have gained 22.6% in the past year compared with the industry’s 20.5% rise. 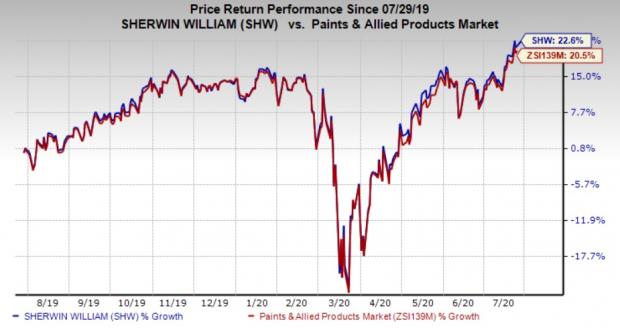 D.R. Horton has a projected earnings growth rate of 14.5% for the current year. The company’s shares have rallied around 51% in a year. It currently has a Zacks Rank #1 (Strong Buy). You can see the complete list of today’s Zacks #1 Rank stocks here.

Meritage Homes has a projected earnings growth rate of 10.4% for the current year. The company’s shares have rallied roughly 57% in a year. It currently carries a Zacks Rank #1.

Masco has an expected earnings growth rate of 6.2% for the current year. The company’s shares have shot up around 37% in the past year. It presently carries a Zacks Rank #1.