The U.S. telecom stocks witnessed a relatively flat trajectory in the past week as earnings took the center stage and geopolitical tensions took the backseat. The quarterly performance of hitherto reported companies has been a mixed bag, with better-than-expected bottom-line figures despite broad-based revenue hit by the coronavirus-induced turmoil. However, estranged Sino-U.S. relationship with ebbing diplomatic ties remained a latent threat as the communist nation made a tit-for-tat move and asked Washington to vacate its consulate in Chengdu.

The U.S. government had earlier ordered the shutdown of China’s Houston consulate, citing the move as a necessary step for protecting intellectual property rights and data sovereignty. This evoked a sharp response from China and it shut down the U.S. consulate in Chengdu, the capital of Sichuan province in the southwest part of the country, which is regarded as one of the strategic positions by Washington given its close proximity to Tibet. With expectations of another round of coronavirus-related fiscal stimulus and a favorable earnings season, the industry appeared to shake off the negative vibes from the geopolitical crisis and held its fort among all adversities.

The FCC has selected the U.S. Telecom-led Industry Traceback Group as the Official Consortium for coordinating industry-led efforts to trace the roots of spam calls so that the growing menace of robocalls are eliminated at the core and criminals are brought to book. Meanwhile, the Congress is aiming to gain a consensus on additional government stimulus for the pandemic, with a proposal of $1 billion in funding to subsidize FCC’s plan to rip out China-based Huawei and ZTE gear from the domestic telecom network. The move gains precedence as various media reports claim that the telecom sector is likely to see healthy growth in the second half of the year despite worldwide restrictions. The spurt of growth is largely attributable to new infrastructure investments and 5G adoption amid the coronavirus-induced challenges.

1.     AT&T Inc. (T - Free Report) reported relatively healthy second-quarter 2020 results with adjusted earnings surpassing the Zacks Consensus Estimate and revenues missing the same as the coronavirus pandemic hit top-line growth, fueling uncertainty within the organization and limiting future visibility. Despite the worldwide mayhem that led to short-term financial impacts, the company expects to continue investing in key areas and adjust its business according to the demand of the situation to fuel long-term growth, while maintaining a healthy dividend payment and actively pruning debt.

Non-GAAP net income per share came in at $1.18 compared with $1.23 in the year-ago quarter. The bottom line beat the Zacks Consensus Estimate by 2 cents. Quarterly aggregate operating revenues declined 5.1% year over year to $30,447 million. This was the result of substantial declines in wireless equipment revenues in the Consumer and Business segments, primarily due to limited in-store engagement and the impact of COVID-19 on customer behavior. Nevertheless, the top line surpassed the consensus mark of $29,910 million.

Core net income came in at $218 million or 25 cents per share compared with $410 million or 45 cents in the prior-year quarter. The bottom line beat the Zacks Consensus Estimate by 14 cents, with an earnings surprise of 127.3%. Quarterly core sales declined to $2,588 million from $2,986 million recorded in the year-ago quarter. Nevertheless, the top line surpassed the consensus mark of $2,386 million. 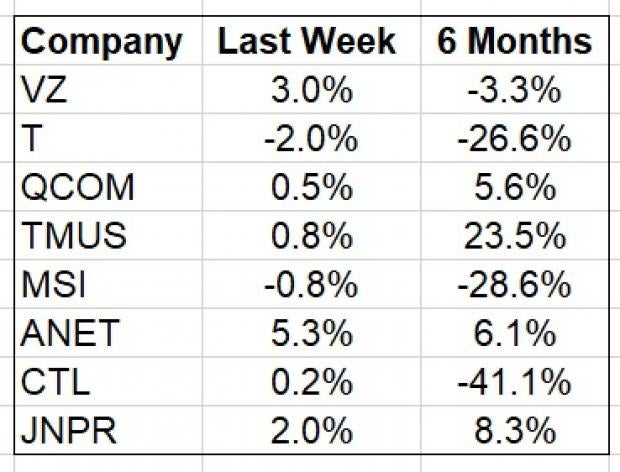 Over the past six months, the Zacks Telecommunications Services industry declined 8.7%, while the S&P 500 recorded average loss of 0.1%. 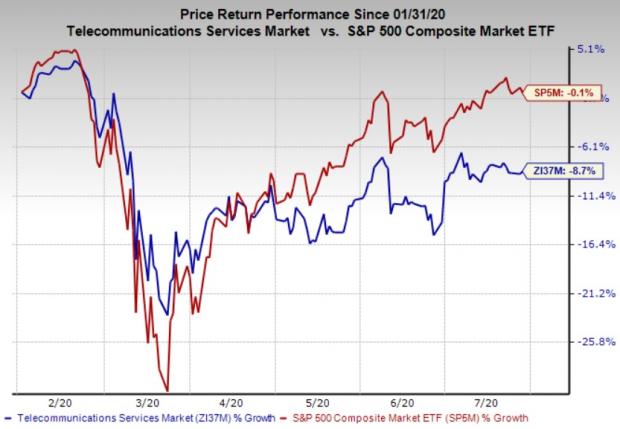 In addition to the remaining earnings releases and 5G deployments, all eyes will remain glued to how the administration attempts to safeguard the interests of domestic firms from Chinese threats.