Adjusted earnings were 18 cents per share for the quarter, which surpassed the Zacks Consensus Estimate of 9 cents.

Total revenues fell around 22% year over year to $1,093 million. The company saw lower volumes across all segments in the quarter. However, revenues beat the Zacks Consensus Estimate of $1,077.5 million.

Revenues in the Fluoroproducts segment fell roughly 26% year over year to $523 million in the reported quarter. The decline was caused by the impacts of the coronavirus outbreak on global automotive original equipment manufacturers and industrial end-markets.

Revenues in the Chemical Solutions unit were $82 million, down 37% year over year. The company saw lower volumes in the quarter mainly due to coronavirus-related mine closures. Average prices also fell due to regional customer mix.

Revenues in the Titanium Technologies division were $488 million, down around 14% from the prior-year quarter. The decline was attributable to lower volumes resulting from weaker demand, mainly in Europe, Latin America and Asia. Average selling prices also fell on a year-over-year basis.

Cash provided by operating activities was $111 million in the quarter while free cash flow was $50 million.

Chemours noted that although its outlook for the second half is improving, it remains uncertain. The company remains focused on executing its short-term response plan and long-term strategy amid the uncertainties. The company aims to cut costs by $160 million and capital expenditure by roughly $125 million in 2020.

Chemours’ shares are down 0.9% in the past year compared with a 3.5% decline recorded by its industry. 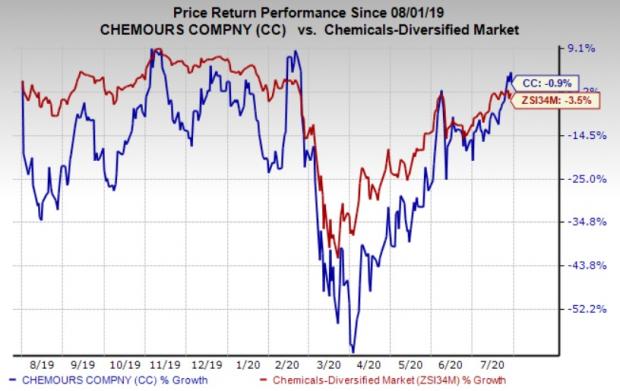 Royal Gold has a projected earnings growth rate of 62.1% for the current year. The company’s shares have gained around 19% in a year. It currently has a Zacks Rank #1 (Strong Buy). You can see the complete list of today’s Zacks #1 Rank stocks here.

Equinox Gold has a projected earnings growth rate of 255.2% for the current year. The company’s shares have rallied roughly 94% in a year. It currently carries a Zacks Rank #2 (Buy).

Kinross Gold has an expected earnings growth rate of 85.3% for the current year. The company’s shares have shot up around 116% in the past year. It presently carries a Zacks Rank #2.