Interactive Brokers (IBKR) to Pay $38M to 3 US Regulators

The Securities and Exchange Commission (“SEC”) said in a statement yesterday that Interactive Brokers Group, Inc. (IBKR - Free Report) will pay a penalty of $11.5 million to settle charges it repeatedly failed to file Suspicious Activity Reports (“SARs”) for U.S. microcap securities trades executed on behalf of its customers.

Also, the Financial Industry Regulatory Authority (“FINRA”) and the Commodity Futures Trading Commission (“CFTC”) announced that they had agreements with Interactive Brokers related to anti-money laundering failures. Per the agreement, the registered broker-dealer agreed to pay $15 million and $11.5 million to the respective agencies.

Following the announcement of the news, shares of Interactive Brokers lost 3.2%.

According to the SEC, Interactive Brokers failed to file more than 150 SARs to flag potential manipulation of microcap securities in its customers’ accounts for a year, ending mid-2017. The firm failed to properly investigate suspicious activity as required by its written supervisory procedures and was unsuccessful in filing SARs in a timely fashion, even when suspicious transactions were flagged by compliance personnel.

Notably, for transactions, which are suspected to involve fraud or a lack of an apparent lawful business purpose, broker-dealers are required to file SARs.

Interactive Brokers consented to the settlements, without admitting to or denying the regulators’ findings.

Notably, FINRA’s action focused on a period starting from January 2013 till September 2018, while the CFTC’s action covered the period between June 2014 and November 2018.

Since its inception, Interactive Brokers has mainly been focusing on developing proprietary software to automate broker-dealer functions. The company has been a pioneer in the field of developing and applying technology as a financial intermediary in the capital markets where it operates. However, due to higher execution, clearing and distribution fees; the company’s expenses have remained elevated over the past several years, hurting the bottom line to an extent.

Shares of Interactive Brokers have gained 6.3% so far this year against the industry’s decline of 10.7%. 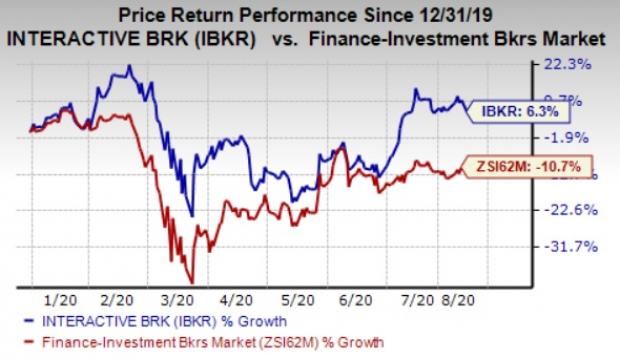 A few other top-ranked stocks from the same space are mentioned below.

ETRADE Financial Corporation witnessed an upward earnings estimate revision of 13% for the current year over the past 60 days. Its share price has risen 27.9% over the past year. It currently carries a Zacks Rank #2.

The Zacks Consensus Estimate for TD Ameritrade Holding Corporation current fiscal year earnings has been revised 21.8% upward over the past 60 days. Its share price has declined 16.1% over the past 12 months. The company currently sports a Zacks Rank #1.

Nomura Holdings, Inc. (NMR - Free Report) witnessed an upward earnings estimate revision of 55.8% for the current fiscal year over the past 60 days. Its share price has risen 40% over the past year. It currently carries a Zacks Rank #2.