Stericycle (SRCL) Stock Up 1.5% Since Q2 Earnings: Here's Why

Shares of Stericycle, Inc.(SRCL - Free Report) have gained 1.5% since it reported its second-quarter 2020 results on Aug 6, outperforming 0.2% growth of the industry it belongs to. 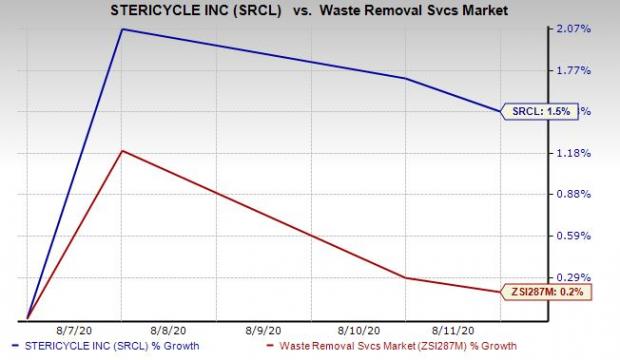 The outperformance can be attributed to the company’s better-than-expected second-quarter 2020 results and debt-reduction by using the net proceeds from a divestiture.

Adjusted earnings per share of 46 cents beat the Zacks Consensus Estimate by 84% and revenues of $598.2 million beat the consensus mark by 3.3%.

During the reported quarter, Stericycle reduced net debt by almost $514 million through net proceeds from the sale of the Domestic Environmental Solutions business of $427.7 million and cash flow from operations.  This lowered the company’s adjusted debt-to-EBITDA leverage ratio to 3.89.

Notably, earnings fell 17.9% year over year, owing to an unfavorable impact of 11 cents from divestitures and foreign-exchange rates, 4 cents from lower revenue flow and 3 cents from higher adjusted tax rate.  These were partially offset by a benefit of 8 cents from lower interest expense.

Total revenues declined 29.3% year over year on a reported basis. The downfall was due to divestitures that hurt revenues by $149.6 million, and foreign-exchange rates that impacted revenues by $9.9 million. Revenues were down $89.4 million on an organic basisdue to the COVID-19 pandemic.

Concurrent with the earnings release, the company also announced that it has completed the sale of its operations in Argentina on Aug 3, 2020 for nearly $3.9 million. This marked the seventh divestiture by Stericycle in the last 18 months.

Regulated Waste and Compliance Services revenues declined 24.4% year over year on a reported basis and 0.3% organically to $418.1 million. The segment contributed 70% to total revenues.

Secure Information Destruction revenues declined 33.5% year over year on a reported basis and 33.6% organically to $152.5 million. The segment contributed 25% to total revenues.

Communication and Related Services revenues fell 56.3% year over year on a reported basis and 17.1% organically to $27.6 million. The segment contributed 5% to total revenues.

Revenues from North America were $491.3 million, down 30.1% year over year on a reported basis and 10.4% organically. The region contributed 82% to total revenues.

International revenues of $106.9 million fell 25.2% year over year on a reported basis and 11.6% organically. The region contributed 18% to total revenues.

The company generated $125.2 million of net cash from operating activities and capex was $35 million in the quarter. Free cash flow of $90.2 million was generated in the reported quarter.

Kohl's (KSS) to Post Q2 Earnings: What's in the Offing?