Shares of Delphi Technologies have gained 6.9% since it reported its second-quarter 2020 results on Aug 5 against the 2.9% decline of the industry it belongs to. 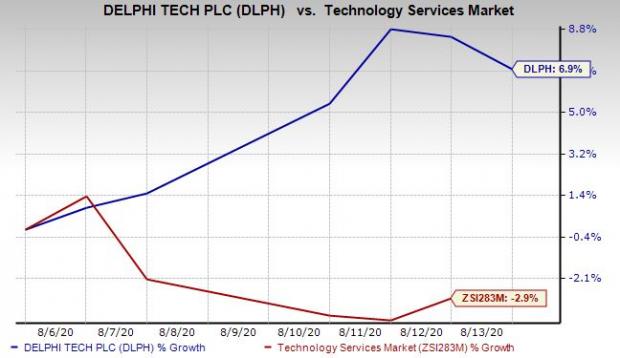 The outperformance can be attributed to the company’s better-than-expected second-quarter 2020 results and healthy cash flow.

Adjusted loss of 58 cents per share was narrower than the Zacks Consensus Estimate by 34.8% and revenues of $628 million beat the consensus mark by 13.2%.

During the reported quarter, the company generated $10 million of cash from operating activities. Also, cash proceeds of nearly $40 million earned from the sale of a technical center further strengthens the company’s balance sheet.

Total revenues decreased 44% year over year on a reported basis and 41% on an adjusted basis (adjustments were made for currency exchange). The downside was mainly due to lower global production and the closure of customer-production sites related to the coronavirus outbreak and the downward trend in passenger car diesel fuel injection systems in Europe, partially offset by solid growth in  Power Electronics.

Let’s delve deeper into the numbers

Region-wise, adjusted revenues declined 57% in Europe, 61% in North America and 34% in South America, partially offset by 13% growth in Asia Pacific, including an increase of 41% in China.