Work related to the deal will be completed in Greenville, SC, and Fort Worth, TX, and is expected to be completed by Dec 31, 2026.

The F-16 Falcon jets have significantly grown in importance on a global scale over the past few years. A number of 4,588 aircraft have been delivered to customers across 29 nations along with numerous upgrades. Over the past couple of years, the F-16 has witnessed significant development as nations, such as Taiwan, Bulgaria, Morocco and Bahrain, have signed respective agreements to procure new F-16 aircraft. Due to the rising importance, Lockheed Martin has introduced F-16 Block 70/72, which is the newest and the most advanced F-16 aircraft, combining numerous capabilities and structural upgrades

Furthermore, the fiscal 2021 defense budget proposal reflected a solid spending provision of $56.9 billion for military aircraft. With both the House and the Senate having passed the fiscal defense budget bill in recent times, such a stupendous budgetary amendment reflects massive growth prospects for Lockheed Martin’s F-16 program in the days ahead.

This would also benefit other prominent jet makers in the United States, like The Boeing Company (BA - Free Report) and Northrop Grumman (NOC - Free Report) .

Lockheed Martin, a Zacks Rank #3 (Hold) stock, has gained 2.8% in the past year against the industry’s decline of 26%. You can see the complete list of today’s Zacks #1 Rank (Strong Buy) stocks here. 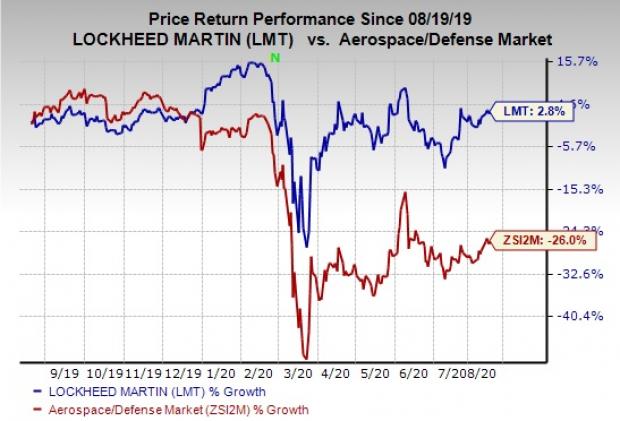