The Mississippi River, Baton Rouge to Gulf Head of Passes project (worth $44.9 million) work includes disposal of material excavated from the Hopper Dredge Disposal Area, which will be used for marsh creation at the West Bay site. The contract work will begin this December and is likely to be completed in fourth-quarter 2021.

The Brigantine Inlet to Great Egg Harbor Inlet, Absecon Island, and Atlantic County Beach Renourishment project — worth $24 million — involves the placement of sand at Atlantic City, Ventnor, Margate and Northport beach locations within New Jersey. The project work is expected to begin in third-quarter 2020 and likely to be completed next January.

The third project named South Ponte Vedra and Vilano Beach Coastal Storm Risk Management is based in Florida and is expected to be completed in the spring of 2021. The work includes dredging of sand from the St. Augustine Inlet Flood Shoal and placing them over three miles of beach, which will be used as a shield against future storms, beach erosion and sea level rise.

The Wilmington Harbor Inner Ocean Bar Maintenance Dredging is the fourth contract and is estimated to be completed in first-quarter 2021. The work includes dredging of the Inner Ocean Bar segment of the shipping channel, and placement of material for coastal protection and beach renourishment on Bald Head Island.

The fifth contract — which is projected to be completed by 2020 — is a Sabine-Neches Waterway, Texas Maintenance Dredging project. The scope of work involves maintenance dredging from the Sabine Pass Channel, Sabine Jetty Channel Outer Bar and Outer Bank Channels with material disposal within four Offshore Material Disposal Sites.

However, planned dry dockings of certain vessels impacted the business in the last reported quarter. Its second-quarter revenues declined 9.1% year over year due to lower foreign, coastal protection, and rivers and lakes contribution. Shares of this Zacks Rank #3 (Hold) company have underperformed the industry in the past three months. 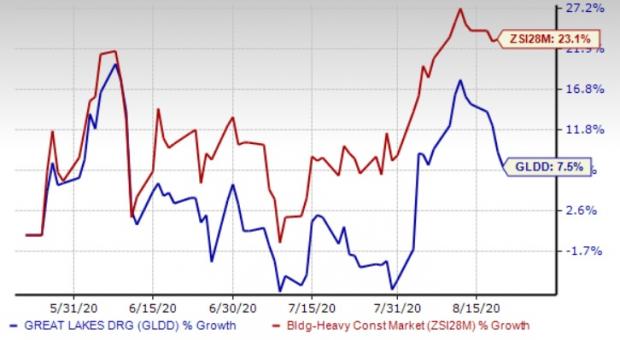 We believe the company’s strong bidding ability and project execution will boost its future performance. The Zacks Consensus Estimate for 2020 earnings is currently pegged at $1.06, indicating a 23.3% year-over-year improvement.