Will Markets Rally in September After Best August in 34 Years?

Forget coronavirus — Wall Street has been on a magical run for five months, mesmerizing market participants, economists and financial experts. No praise will be enough for Wall Street, which defied nearly two months of lockdown and touched one peak after another in this unusually difficult period.

Notably, in late February, when COVID-19 started spreading across the world, a large number of investment analysts said the situation will be worse than the Great Depression. However, at the end of August, investing communities and financial experts started wondering whether the market's amazing momentum will continue in September. Let's discuss briefly.

Plethora of Records in August

Historically, Wall Street remained muted in August. However, this year, the three major stock indexes — the Dow, the S&P 500 and the Nasdaq Composite — have surged 7.6%, 7% and 9.6%, respectively. This was the best August for the Dow since 1984 and for the S&P 500 since 1986. The Nasdaq Composite booked its best monthly performance since 2000.

If we consider the April-August period, the Dow climbed 29.7%, marking its best 5-month gain since July 2009, and the S&P 500 soared 35.4%, reflecting its best 5-month returns since October 1938. The Nasdaq Composite too jumped 52.9%, posting its strongest 5 months since March 2000. Moreover, on Aug 23, tech behemoth Apple Inc. (AAPL - Free Report) became the first publicly traded U.S. company with a market capital of over $2 trillion.

In the month, the S&P 500 entered in positive territory year to date. On Aug 18, the broad-market index recorded a new all-time high since Feb 19, erasing all coronavirus-led losses. The benchmark also crossed the 3,500 level for the first time.

The Nasdaq Composite crossed the landmark 11,000 mark in August. The Dow became green year to date on Aug 28 for the first time since Feb 21. However, it dropped slightly and entered in red zone on Aug 31. Notably, the blue-chip index had a major shake-up on Aug 31.

Will Gains in September Remain Steady?

However, the situation is different this year. The Dow, the S&P 500 and the Nasdaq Composite have skyrocketed 56.1%, 59.7% and 77.6%, respectively, since their recent lowest levels recorded on Mar 23, establishing a new bull market after exiting a coronavrus-induced short bear market.

Although, the market's worst is behind us, we are not completely out of the woods. Let's briefly discuss the major risk factors and positive catalysts for September.

First, the U.S. economy is still reeling under coronavirus-led woes. On Aug 30, the number of people with COVID-19 infection in the United States crossed 6 million. New cases may spike again in September once educational institutions open. We are still lacking any vaccine for Covid-19 despite the FDA's decision to issue an emergency authorization for use in certain groups before the end of final-stage trials.

Second is the disagreement between the Republicans and Democrats regarding a fresh round of fiscal stimulus even after a month-long discussion. The Paycheck for Protection Program (PPP), which was introduced in March ended in July. The Congressional acceptance for a new stimulus clearly shows that all is not well in the economy and further delay may jeopardize the markets.

Third, a large section of economists and financial experts have warned that the market is overvalued thanks to the astonishing rally in the last five months. If major economic data of August (the first month without PPP) come in worse than expected, a strong correction cannot be ruled out.

Fourth, markets are skewed toward the technology sector. That is why the tech-heavy Nasdaq Composite has rallied 31.2% while the S&P 500 has gained just 8.3% and the Dow is still 0.4% in red year to date. More than half of the stocks of both the S&P 500 and the Dow are still incurring losses so far this year.

First, market has room to grow further. Historically, the average returns of the S&P 500 and the Dow in the last 23 U.S. Presidential election years were 11.3% and 6%, respectively. Moreover, in its latest projection the Atlanta Fed estimated 25.6% growth for the third-quarter U.S. GDP after it plunged 31.7% in the second quarter. Furthermore, projections for U.S. corporate earnings for third-quarter and full-year 2020 are rising since early July.

Second, market rally is broad-based. Aside from the large three large-cap specific indexes, the small-cap centric Russell 2000 and the mid-cap specific S&P 400 have rallied 61.6% and 58.1%, respectively, since Mar 23. Moreover, the U.S. economy will gradually return to the pre-pandemic level as more parts of it reopen. This will set stocks from cyclical sectors such as industrials, financials, materials and consumer discretionary apart from the technology sector.

Third, the technology sector will hold its strong momentum. In a coronavirus-stricken global economy, virtualization has become the norm for communications. It means the application of high-tech digitization. Individuals who enjoy immense benefits of digital platforms are less likely to go back to their old habits. Additionally, business entities will be more interested in cloud computing, automation and artificial intelligence to establish smooth supply chain systems.

Fourth, as per Germany’s Kiel Institute for the World Economy, global trade is witnessing a V-shaped recovery from the coronavirus pandemic. The shipping volume is back to a level that took more than one year during the financial crisis of 2008-2009. The global economy will flourish as countries increasingly remove trade and travel-related restrictions.

At this stage, it will be prudent to invest in large-cap (market capital > $50 billion) stocks with a favorable Zacks Rank as these companies have well established businesses and brand names along with strong long-term (3-5 year) growth potential.

The chart below shows the price performance of our six picks year to date. 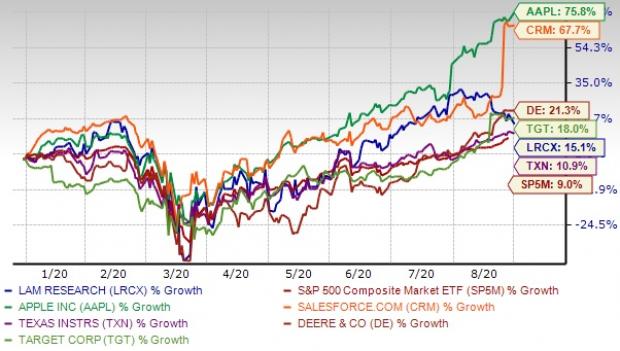 Here's Why You Should Invest in LHC Group (LHCG) Stock Now