Kennametal Inc. (KMT - Free Report) seems to have lost its sheen to the end-market challenges caused by the pandemic. Also, forex woes, high restructuring charges and other headwinds are concerning for the company. Notably, its price performance has been weak and its earnings estimates have been lowered lately, pointing toward bearish sentiments for the stock.

The company is based in Latrobe, PA, and has a market capitalization of $2.5 billion. It belongs to the Zacks Manufacturing – Tools & Related Products industry, which is part of the broader Zacks Industrial Products sector.

In the past three months, its shares have gained 1.8% compared to no movement for the industry. Also, the sector grew by 14.1% and the S&P 500 expanded 7.7% during the same timeframe. 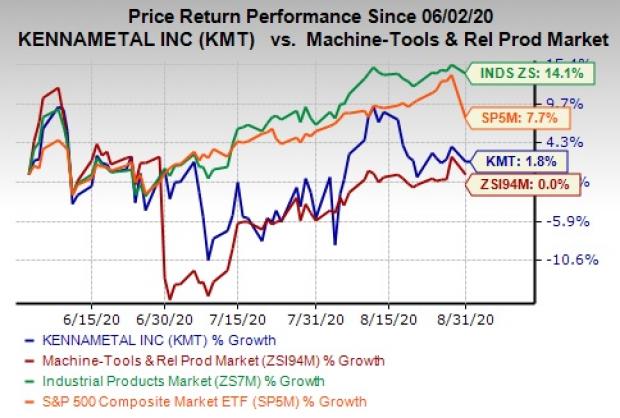 Below we have discussed why it is prudent to avoid Kennametal.

Pandemic-Led Headwinds & High Charges: Kennametal’s earnings in fourth-quarter fiscal 2020 (ended Jun 30, 2020) decreased 82.1% from the year-ago quarter on a 37% decline in revenues and weak margin results. Organic sales in the quarter were down 33% year over year on weakness in end markets caused by the pandemic. On a segmental basis, organic sales for the three segments — Industrial, WIDIA and Infrastructure — were down 36%, 32% and 29%, respectively, from the year-ago quarter.

The company remains wary of the pandemic-related uncertainties in the quarters ahead and so refrained from providing financial projections for fiscal 2021 (ending June 2021).

In addition, the company recorded simplification/modernization initiatives (pre-tax)-related charges of $18 million or 17 cents per share in the fourth quarter of fiscal 2020 and $54 million in fiscal 2020. For fiscal 2021, it expects pre-tax restructuring charges of $90-$100 million, higher than $55-$60 million mentioned earlier.

However, its innovation capabilities, solid product portfolio, restructuring actions-related benefits and cost-saving efforts might support performances in the quarters ahead.

Risks From International Operations: The company is exposed to risks — including geopolitical issues, unfavorable movements in foreign currencies and others — arising from international operations. Notably, it has a presence in the Asia Pacific, Europe, Africa, the Americas and the Middle East.

In fourth-quarter fiscal 2020, the company’s sales were lowered to the extent of 2% on forex woes.

Abilities to Address Financial Obligations: Its ability to repay financial obligations (long-term debt at the end of fourth-quarter fiscal 2020 was $594.1 million and total debt to total capital was at 46%) is concerning. A declining trend is visible in its times interest earned ratio over the past two-three quarters.

Also, the company’s fourth-quarter times interest earned is below the industry’s 4.1X.

Earnings Estimate Trend: Kennametal’s earnings estimates have been revised downward in the past 60 days. Currently, the Zacks Consensus Estimate for its earnings is pegged at 90 cents per share for fiscal 2021, reflecting a decline of 23.7% from the 60-day-ago figure. The same for fiscal 2022 (ending June 2022) has declined 13.7% to $1.57 during the same period.

In addition, earnings estimates for first-quarter fiscal 2021 (ending September 2020) are pegged at 3 cents per share, down from 9 cents mentioned 60 days ago. There were four downward revisions and one upward in the past 60 days.

In the past 60 days, earnings estimates for these companies have improved for the current year. Further, earnings surprise for the last reported quarter was 380.00% for Tennant, 76.47% for Altra Industrial and 25.98% for Stanley Black.