Currently, Ionis owns 76% stake in Akcea. Per the terms of the agreement, Ionis has offered to acquire the remaining 24% of common stock of Akcea for $18.15 per share in cash or aggregate value of approximately $500 million in an all-cash deal. The offer price represents almost 60% premium on closing price of Akcea’s shares on Aug 28. The transaction has already been approved by the board of directors of both companies as well as by the independent affiliate transactions committee of Akcea's board of directors. It is expected to be closed in the fourth quarter. Ionis expects to fund the acquisition through its existing cash resources. The company had approximately $530 million in cash and cash equivalents as of June end.

Please note that Akcea was formed in 2014 by Ionis, primarily to focus on development and commercialization of medicines to treat people with serious and rare diseases. Akcea started trading as a separate public entity in July 2017. Before its initial public offering, Akcea was a fully-owned affiliate of Ionis.

Ionis believes that the acquisition of Akcea will drive efficiencies, enhance capabilities and further strengthen its financial position.

Shares of Ionis were up 3.2% while Akcea’s shares were up 60.6% on Aug 31, following the announcement of the acquisition offer. Shares of Ionis have declined 9.8% so far this year compared with the industry’s decrease of 6.2%. 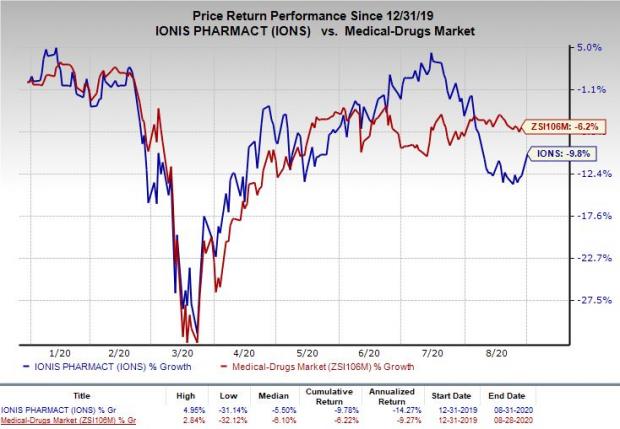 Ionis believes that bringing the two companies under one leadership will deliver significant strategic value and lead to success by accelerating its next phase of growth. Akcea commercializes two marketed drugs — Tegsedi (polyneuropathy caused by hereditary TTR amyloidosis) and Waylivra (familial chylomicronemia syndrome) — which were developed by Ionis and out-licensed to Akcea. Sales from these two drugs increased almost 90% year over year in the first half of 2020.

Meanwhile, Akcea currently has four key candidates in its pipeline. Two of them — AKCEA-TTR-LRx and AKCEA-APOCIII-LRx — are being developed solely by Akcea. Other two candidates — AKCEA-APO(a)-LRx and AKCEA-ANGPTL3-LRx— are being developed by Akcea in collaboration with Novartis (NVS - Free Report) and Pfizer (PFE - Free Report) , respectively. The candidates target rare or cardiometabolic indications. Successful development of these candidate will boost Ionis’ prospects.

Copart (CPRT) to Report Q4 Earnings: What's in the Cards?