AVEO's NDA for Fotivda on Track, FDA Verdict Due Next Year

In June 2020, the FDA accepted the company’s filing of a new drug application (NDA) seeking an approval for tivozanib as a treatment for relapsed or refractory renal cell carcinoma (RCC). The regulatory body set an action date of Mar 31, 2021.

The NDA was based on data from the phase III TIVO-3 study, which evaluated tivozanib for the third and the fourth-line RCC. Per the company, the application is also supported by three additional studies including the active comparator-controlled phase III TIVO-1 study comparing tivozanib to Bayer AG’s (BAYRY - Free Report) Nexavar (sorafenib) for first-line RCC and two phase II clinical studies on tivozanib for patients who progressed on Nexavar in TIVO-1 and the placebo-controlled study for first-line RCC.

Shares of AVEO have declined 24.3% so far this year compared with the industry’s decrease of 2.3%. 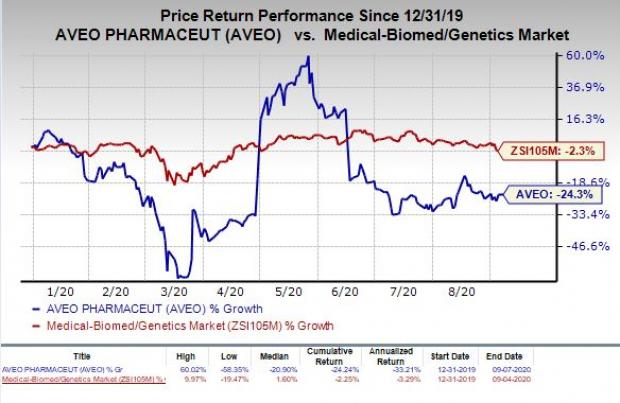 We remind investors that in August 2017, AVEO and partner EUSA Pharma received an approval from the European Commission for its VEGF tyrosine kinase inhibitor Fotivda (tivozanib) to treat advanced RCC. AVEO receives royalties from Fotivda sales in certain European countries and additional milestone fees on the reimbursement approval obtained by EUSA.

Meanwhile, AVEO is evaluating Fotivda in combination with AstraZeneca’s (AZN - Free Report) PD-L1 inhibitor Imfinzi (durvalumab) in the phase Ib/II DEDUCTIVE study for the first-line treatment of patients with advanced unresectable hepatocellular carcinoma with no history of systemic therapy. The study now progressed to the phase II for which enrollment is currently underway.

AVEO is also evaluating Fotivda in combination with Bristol-Myers’ (BMY - Free Report) PD-1 inhibitor Opdivo (nivolumab) in the Ib/II TiNivo study for the first- and second-line treatment of RCC.

We believe that the RCC market holds great potential as the indication is among the 10 most common cancers in men and women. A potential approval of Fotivda in the United States will be a huge boost to the company. However, AVEO faced several setbacks recently, which hurt the stock significantly. Moreover, the company is heavily dependent on its partners for the development and commercialization of its pipeline candidates. If any of the partners fails to receive regulatory approvals or terminates a deal, AVEO’s prospects will be severely hit.

Mastercard, Its Partners and ADB to Cushion Small Businesses