Shares of Teck Resources Limited (TECK - Free Report) have not had a solid run so far this year. The company’s stock has depreciated 21.8%, year to date, as against the stocks in the industry that recorded cumulative growth of 10.1%. This downside resulted from uncertainties related to the extent and impact of the coronavirus pandemic on demand as well as commodity prices, suppliers and global financial markets.  Moreover, muted production guidance across the company’s business segments is a concern.

Notably, the Zacks Consensus Estimate for the current-year earnings per share is pegged at 61 cents, indicating a year-over-year slump of 72.5%. The estimate has moved 1.6% south over the past 30 days. 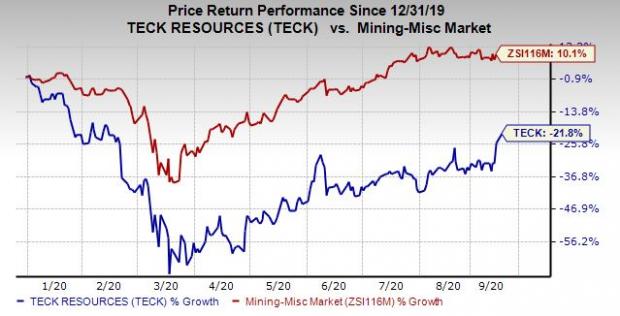 On Jul 23, the company reported second-quarter 2020 results. Teck Resources delivered adjusted net earnings of 12 cents per share in the quarter, reflecting a year-over-year slump of 81% due to costs related to the suspension of the Quebrada Blanca Phase 2 (QB2) project. The pandemic affected the prices and demand for the company’s products, and financial results during the June-end quarter.

For the second half of the year, management expects steelmaking coal production between 11 million tons and 12 million tons, down from the prior guidance of 23-25 million tons. The guidance reflects impact of the scheduled shutdown of Neptune Bulk and the pandemic.

During the March-end quarter, the company reduced Fort Hills to a single-train facility in order to reduce negative cash flow in light of the pandemic. Therefore, Teck Resources’ share of bitumen production from Fort Hills was down 16,579 barrels per day on a year-over-year basis during the June-end quarter.

Construction activities at the QB2 copper project are gradually and safely ramping up, following the temporary suspension in March. The QB2 project will transform the company’s copper business, making it a major global copper producer. Copper production from Highland Valley Copper are expected to be higher during the second half of this year compared with the first half as a result of increased mill throughput and rising ore grades. Currently, Highland Valley Copper, Antamina, Carmen de Andacollo and Quebrada Blanca are operating at full production rates, which the company expects to maintain through the second half of 2020. Furthermore, improvement in metal and crude prices will drive the company’s growth.

Teck Resources has implemented a cost-reduction program to lower its operating costs, and deferred some of the planned capital projects in a bid to counter the uncertain economic conditions. Since the commencement of the program in fourth-quarter 2019, it has so far achieved approximately $250 million in operating-cost reductions and $430 million in capital-cost reductions. Moreover, Teck Resources continues to implement its innovation-driven efficiency program RACE21 that is expected to improve productivity across the business.

Kinross has an expected earnings growth rate of 100% for the current year. The company’s shares have surged 71.7% over the past year.

Eldorado Gold has an anticipated earnings growth rate of 2.33% for the ongoing year. Its shares have rallied 14.5% in the past year.