Here's Why You Should Add NEOGEN (NEOG) to Your Portfolio Now

NEOGEN Corporation (NEOG - Free Report) has been gaining on robust segmental growth. Its international performance has also been impressive. Strong revenues in the fiscal first quarter of 2021 buoy optimism. However, downsides may result from unfavorable currency movements and a stiff competitive landscape.

The renowned food and animal safety products provider has a market capitalization of $3.62 billion. The company projects 10% growth for the next five years and expects to maintain strong segmental performance. The company surpassed estimates in two of the trailing four quarters and missed estimates in the other two, the average negative surprise being 0.87%.

Per our Style Score, NEOGEN has Growth Score of B, which is reflective of the company’s solid prospects. Our research shows that stocks with a Growth Style Score of A or B combined with a Zacks Rank #1 (Strong Buy) or 2 offer the best upside potential. 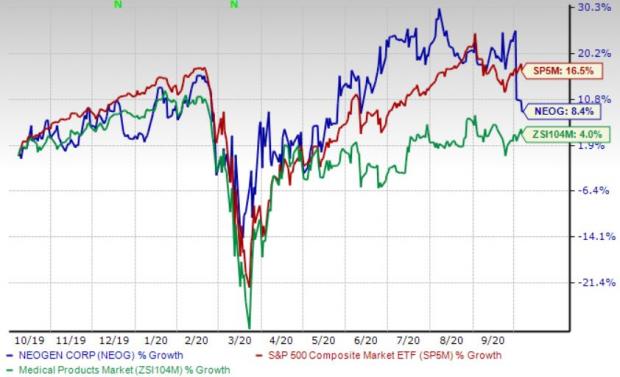 Impressive Q1 Results: We are upbeat about NEOGEN’s impressive results in the first quarter of fiscal 2020. The company’s segmental performance was primarily boosted by enhanced sales of hand sanitizers, cleaners and disinfectants to meet requirements created by the coronavirus pandemic. NEOGEN’s international performance of both operating segments was impressive despite the challenging global business climate.

Partnerships and Acquisitions: We are optimistic about the series of partnership deals inked by NEOGEN of late. The company, in September, entered into a sponsorship agreement with the National FFA to support the agricultural organization and help fight the spread of COVID-19.

In August, NEOGEN completed the previously announced acquisition of the U.S. (including territories) rights to Elanco’s StandGuard Pour-on for horn fly and lice control in beef cattle, and related assets. Other notable partnerships of NEOGEN include the one with Ripe Technology (a food industry blockchain pioneer) in February this year. NEOGEN acquired Diessechem this January, expanding its European operations.

Robust International Business: We are upbeat about NEOGEN’s impressive international business performance in the first quarter of fiscal 2020. Strength in revenues at the Food Safety segment from the U.K. in U.S. dollars on strong sales of hand sanitizers, cleaners and disinfectants buoys optimism. The segment’s revenues from China more than doubled on gains in sales across the group’s entire product portfolio, particularly biosecurity products, due to the country’s continuous fight against the COVID-19 pandemic and African swine fever. Segmental revenues from India and Brazil were also robust in U.S. dollars.

Revenues from NEOGEN’s worldwide animal genomics business were also strong in the reported quarter in comparison to the year-ago period.

However, downsides might result from currency headwinds faced by the company. In the first quarter of fiscal 2021, NEOGEN’s international business was significantly impacted by unfavorable currency movements. When the virus began spreading worldwide, there was a currency movement toward the safety of the U.S. dollar. This negatively impacted local currencies in the company’s international locations, particularly in those regions where the outbreaks were out of control.

NEOGEN faces stiff competition from small businesses as well as large multinational companies. Some of these organizations have substantially greater financial resources than the company. Historically, NEOGEN has faced intense competition resulting from the development of new technologies by the company’s competitor, which could affect marketability and profitability of NEOGEN’s products.

NEOGEN has been witnessing an upward estimate revision trend for 2021. Over the past 60 days, the Zacks Consensus Estimate for its earnings has moved 1.7% north to $1.23.

The Zacks Consensus Estimate for second-quarter fiscal 2021 revenues is pegged at $115.5 million, suggesting a 7.1% rise from the year-ago reported number.

QIAGEN’s long-term earnings growth rate is estimated at 22.3%. It currently flaunts a Zacks Rank #1. You can see the complete list of today’s Zacks #1 Rank stocks here.