Here's Why You Should Add AngioDynamics to Your Portfolio Now

AngioDynamics, Inc. (ANGO - Free Report) is likely to gain from a series of lucrative acquisitions and a robust product portfolio.

In the past three months, shares of AngioDynamics have gained 14.6% compared with the industry’s growth of 14%.

With a market capitalization of $441 million, the company designs, manufactures and sells a wide range of medical, surgical and diagnostic devices. Its devices are generally utilized in minimally invasive, image-guided procedures. The company has a trailing four-quarter earnings surprise of 111.7%, on average.

The company is on track to deliver two newAngioVac products in calendar year of 2021. During the fiscal first quarter, the company saw continued strength from its AngioVac platform. The company’s total VIT business grew 3.3% year over year, driven by AngioVac sales growth of 46% from the prior-year quarter.

The company also continues to progress with the Auryon technology. Management is currently anticipating Auryon to generate $7 million to $10 million in revenues in fiscal 2021.In the fiscal first quarter, the company’s VIT business raked in $1.1 million in sales from its Auryon platform. 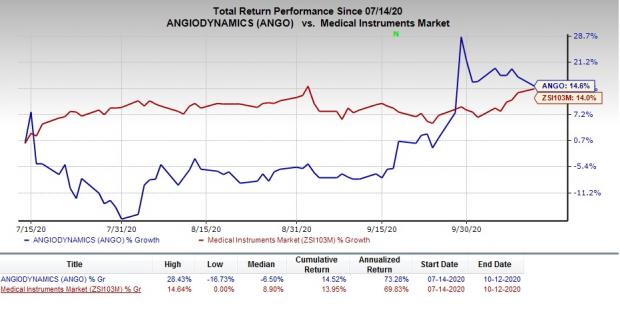 In September 2020, the company launched the AuryonAtherectomy System, a newly developed path-breaking technology for the treatment of Peripheral Artery Disease, which includes Critical Limb Ischemia and In-Stent Restenosis. Laser atherectomy procedures with AURYON laser have continued gaining traction along with other procedures and are still very early in the ramp stage.

FDA Approval for DIRECT Study: Earlier, the company announced that it has received an approval from the FDA to initiate a clinical study for treating stage III pancreatic cancer. The approval is for an investigational device exemption (IDE) application for NanoKnife Irreversible Electroporation “Direct IRE Cancer Treatment” clinical study (DIRECT).

The company’s PATHFINDER and DIRECT studies continue to remain primary focus, with activity in these studies continuing to improve through the fiscal first quarter, despite a temporary halt. By the end of the first fiscal quarter, 23 DIRECT study sites secured IRB approval as the company added two additional sites.

For fiscal 2021, the Zacks Consensus Estimate for revenues is pegged at $281 million, suggesting an improvement of 6.4% from the year-ago figure. For adjusted earnings, the same stands at a cent, indicating a decline of 88.9% from the prior year.