On a reported basis, Dover delivered earnings per share of $1.38 in the September-end quarter, reflecting a year-over-year decline of 1.4%.

Total revenues in the third quarter came in at $1,748 million, marking a decline of 4% from the year-ago quarter. The revenue figure, however, surpassed the Zacks Consensus Estimate of $1,637 million.

The Engineered Products segment revenues went down to $387 million from the $427 million recorded in the year-ago quarter. The segment’s income decreased 12.2% year over year to $65 million.

The Fueling Solutions segment revenues declined to $380 million from the year-earlier quarter’s $412 million. The segment’s income edged down 1.5% year over year to $67 million.

The Imaging & Identification segment revenues fell to $266 million from the prior-year quarter’s $275 million. The segment’s income dropped 16.2% year over year to $52 million.

The Pumps & Process Solutions revenues climbed 2% year over year to $348 million in the third quarter. The segment income came in at $89.8 million compared with the year-ago quarter’s $77.4 million.

Dover’s bookings at the end of the third quarter were worth $1.80 billion compared with prior-year quarter’s $1.81 billion. Backlog increased 14.3% year over year to $1.58 billion at the end of the reported quarter.

Dover’s shares have gained 9% over the past year, outperforming the industry’s growth of 8.5%. 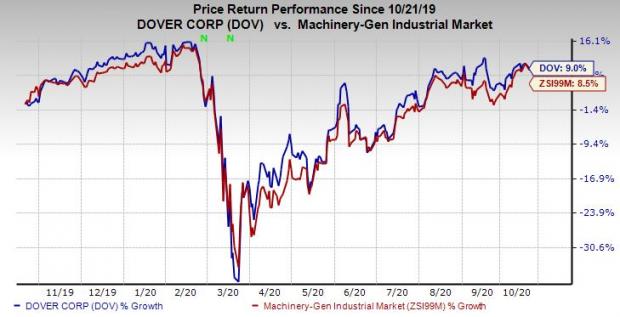 Sealed Air has a projected earnings growth rate of 3.9% for the current year. Shares of the company have gained 46.9% over the past six months.

How Will C.H. Robinson (CHRW) Fare This Earnings Season?