Apple (AAPL - Free Report) shares are up over 6% in the last month, even though they have fallen since its October 12 event that showcased its new lineup of 5G-enabled iPhones. More recently, Wall Street has turned its attention to the U.S. Department of Justice’s antitrust lawsuit against Alphabet Inc. (GOOGL - Free Report) that partly focuses on its relationship with Apple.

Despite the concerns, it is far from certain that the lawsuit will truly shake up Google or Apple. And of course, Google has said it will fight back against the lawsuit and the litigation could take years. It is also worth noting that Alphabet stock has climbed this week, which might tell investors something.

With this in mind, let’s dive into Apple ahead of the release of its fourth quarter fiscal 2020 financial results that are due out on Thursday, October 29 to help decide if it’s time to buy AAPL stock.

Google relies heavily on search traffic from iPhones, where its flagship search engine is the current default on Apple’s Safari phone browser. The two tech giants don’t release the financial significance of this mutually beneficial relationship.

That said, reports project that Google pays Apple between $8 billion to $10 billion a year to be the default search engine on iOS devices. And the DOJ lawsuit projects that this partnership accounts for between 15% and 20% of Apple’s annual profits.

These are big numbers and the situation is worth monitoring closely. However, Apple, Alphabet, Amazon (AMZN - Free Report) , and Facebook (FB - Free Report) have all been under increased government scrutiny for years and it didn’t prevent any of their stocks from climbing to new highs. And their overall earnings outlook (also read: Previewing Big Tech Earnings). 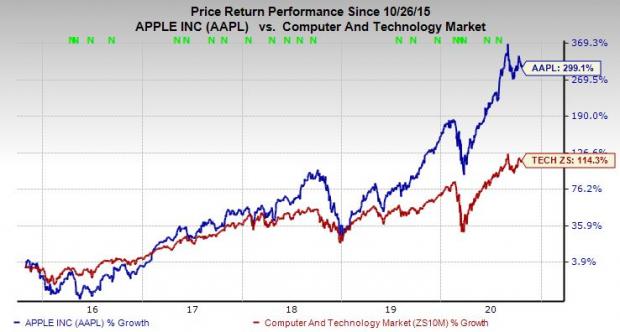 Apple’s newest iPhone officially became available on Friday, October 23. The iPhone 12 is its first 5G-capable phone and it will be available in four models at various price points. The company priced its higher-end models roughly the same as last year’s iPhone 11, despite the new features and its 5G capabilities. The reasoning is somewhat clear: 5G is still in the early days and AT&T (T - Free Report) and its peers still have miles to go before the next-generation wireless network reaches anything near what the current network does.

Therefore, the price-point helps entice consumers to buy the new iPhone despite what many tech analysts say are the somewhat standard updates to features such as the camera. The next-generation wireless network will play a key role in the future and the company is prepared to benefit from the transition, as it gets people excited now.

It’s also worth remembering that Apple is one of the best marketers in retail history, and it remains the world’s most valuable brand. The ability for a high-end consumer tech firm to lift its sales by 11% last quarter to $60 billion in the heart of a global pandemic and economic crisis is impressive. And analysts have said that the pre-order numbers for the iPhone 12 Pro have been strong across all markets.

Apple’s iPhone sales popped last quarter, and its Mac and iPad sales surged amid the remote work and schooling push. Its wearables unit, which includes its smartwatch and popular wireless headphones, also jumped over 17%, while services climbed 15%. This growth helps showcase how crucial expansion beyond the iPhone is. Apple now has revenue streams coming from its massive App store, and subscription services such as Spotify (SPOT - Free Report) competitor Apple Music, its streaming TV service, news offering, video gaming, and more.

In fact, Apple’s paid subscriptions grew by more than 35 million sequentially to reach over 550 million paid subscriptions across its various services. And executives said on its earnings call that they remain confident it will hit its increased target of 600 million before the end of the 2020 calendar year.

Apple closed the quarter with $81 billion in net cash and returned over $21 billion to shareholders via dividends and buybacks. AAPL’s dividend yield rests at 0.72% right now. The income seems like an added bonus for a company that’s still expanding its portfolio, which includes bringing more of its chips in-house. The move is projected to help cut costs and improve battery life and performance.

Apple trades at 6.4X forward 12-month sales. This marks only a slight premium to its industry and represents a solid discount to Microsoft’s (MSFT - Free Report) 10.2X, as it has for years. AAPL stock has climbed roughly 90% in the past year and over 60% in the last six months. Despite its strong performance, the stock hovers around 12% off its early September highs, which clearly gives it room to run.

AAPL stock soared after it announced its 4-for-1 stock split. The cosmetic move, which Apple has done before, was made to help make its shares more attractive and attainable to a wider array of investors. The stock closed regular trading Friday at $115 per share, while Amazon trades at $3,200 and GOOGL comes in at $1,600.

The pandemic forced Apple to push back the release of its next-generation iPhone. This saw it launch in October and not late September, which will likely boost its Q1 fiscal 2021 sales and hinder its upcoming fourth quarter results.

The success of its services and wearables divisions help make up for the seasonality of its flagship device. With this in mind, our current Zacks estimates call for Apple’s adjusted Q4 earnings to dip 9.2% on 0.51% lower revenue. Nonetheless, Apple’s FY20 EPS figure is projected to climb 9% on 5% stronger sales that would see it hit $273 billion.

Apple’s fiscal 2021 revenue is then projected to jump 15.4% above our current-year estimate to reach $315 billion, with its adjusted earnings expected to come in 24% higher. The company has topped our bottom-line estimates by an average of 16% over the last four periods, including a 27% beat last quarter. And the nearby chart shows that its earnings estimates have trended slightly higher.

Apple is a Zacks Rank #3 (Hold) that rocks an “A” grade for Momentum and a “B” for Growth heading into its upcoming earnings release. Clearly, the near-term remains uncertain and some likely want to wait to see how its results shake out and perhaps hold off until after the election before buying stocks in general.

That said, those with a longer-term outlook of a year or more might want to consider buying Apple at a 12% discount because people are addicted to their iPhones, apps and technology as a whole. And remember that Apple pays a dividend, buys back a ton of stock, and has loads of cash that will help it venture into whatever new areas might be next.