Mergers and acquisitions (M&A) in the shale oil and gas industry are the current hot topic in the energy sector. Companies with better access to capital are boosting their portfolio through acquisitions and paying relatively low prices for assets. Weak commodity price environment, triggered largely by the coronavirus pandemic-induced demand destruction, has affected multiple debt-ridden companies in the shale patches, thereby forcing them to get under the umbrellas of better-positioned acquirers.

Most Investable Upstream Companies are Taken

While all these M&As have left investors guessing about the next acquisition, Pioneer Natural’s CEO Scott Sheffield gave an interesting insight. Bloomberg quoted him saying that the best companies worth investing in are already taken. He said, “There’s only going to be three or four independents that are investable by shareholders” after the latest market downturn.  As such, he expects companies like PioneerNatural (after acquiring Parsley), EOG Resources, Inc. (EOG - Free Report) and ConocoPhillips to be the survivors in the long run. He sees a possibility of Hess Corporation (HES - Free Report) joining the list.

Why Some Will Survive While Others Won’t?

This is the interesting part wherein we will dig deeper and not just talk about how the weak price environment is the reason for this series of M&As.

When oil price was profitable, most of the companies rampantly boosted production using debt capital rather than just employing free cash flow. However, the current energy market with low demand and weaker prices are drying up free cash flows and making debt repayment difficult. The situation has forced some shale operators to discontinue drilling and completion activities, as well as reduce capital expenditures, which will likely result in a decline in the remaining economically producible reserves. Halted drilling amid ongoing production will decrease proved developed producing reserves, one of the most important requirements to obtain financing from banks, or in other word, capital. These upstream companies’ lack of access to capital is blurring their way forward.

So, the decline in proved developed producing reserves and access to capital is hampering many of the producers, while the survivors with ample capital and less levered balance sheet are positioning themselves for a thriving future, when commodity prices will improve. Moreover, their ability to generate free cash flow, even in the current weak price environment, is highly reflective of the strength in their operations. To get a rough picture, if we consider free cash flow per share, we see that the survivors are ahead of other upstream companies, as shown in the figure below. 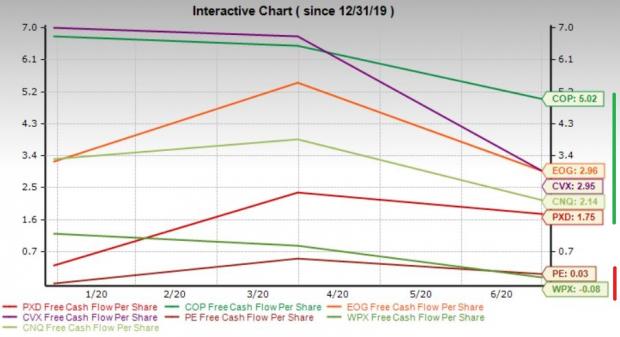 Hence, the survivors will look for opportunities to expand portfolio and enhance synergy derivations through acquiring lucrative assets at beaten-down prices. The current market volatility has created a window of opportunities for them.

Twitter (TWTR) to Report Q3 Earnings: What's in the Cards?