Fomento Economico Mexicano S.A.B. de C.V’s (FMX - Free Report) , alias FEMSA, reported net majority earnings per ADS of 41 cents per share (Ps. 0.90 per FEMSA unit) in third-quarter 2020. The bottom line significantly missed the Zacks Consensus Estimate of 88 cents. Results were primarily marred by the impacts of the coronavirus outbreak across most of its segments.

Net consolidated income for the largest franchise bottler for The Coca-Cola Company (KO - Free Report) was Ps. 4,691 million (US$212.2 million) compared with Ps. 9,613 million (US$495 million) reported in the year-ago quarter, reflecting a decline of 51.2%. The decline can primarily be attributed to lower income from operations, higher other non-operating expenses and a non-cash foreign exchange loss linked to FEMSA’s U.S. dollar-denominated cash position, which was hurt by the appreciation of the Mexican peso.

Total revenues were $5,721.4 million (Ps. 126,501 million), which declined 3% year over year in the local currency, owing to the coronavirus outbreak-led impacts across all operations. On an organic basis, total revenues declined 7.1%.

However, the company notes that it is witnessing consistent recovery trends since the middle of the second quarter, which resulted in sequential improvement across most business segments.

Shares of the company declined 2% on Oct 28 on the soft third-quarter 2020 results. However, the Zacks Rank #5 (Strong Sell) company has declined 11.3% in the past three months against the industry’s growth of 1%. 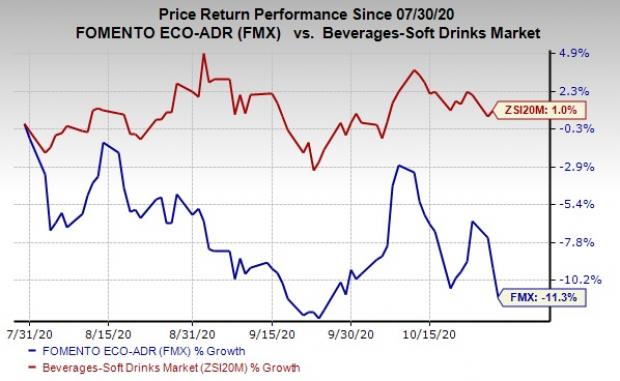 FEMSA Comercio — Proximity Division: Total revenues for the segment declined 6.1% year over year to Ps. 45,478 million (US$2,056.9 million). The decline can primarily be attributed to a 9.1% fall in same-store sales on a 22% decline in store traffic due to reduced customer mobility. However, a 16.5% increase in average ticket, driven by the shift in sales mix toward home consumption categories and SKUs due to the pandemic, partly offset the decline.

In the reported quarter, the company’s OXXO store base increased by 75 stores, including temporary closures. Consequently, FEMSA Comercio’s Proximity division had 19,633 OXXO stores as of Sep 30, 2020.

Operating income declined 43.9% year over year, while operating margin contracted 370 bps to 5.4%, owing to operating deleverage. The increase in operating expenses mainly resulted from the ongoing initiatives to strengthen compensation structure for store personnel as well as higher investments in IT programs and infrastructure.

FEMSA Comercio — Health Division: The segment reported total revenues of Ps. 16,932 million (US$765.8 million), up 6.4% year over year. Revenues benefited from positive trends in Mexican operations and Colombian institutional sales as well as favorable currency translations. This was partially offset by strict mobility restrictions in the Ecuador and Chile operations. Further, same-store sales for drugstores increased 7.5%. On a currency-neutral basis, total revenues increased 3.8%, while same-store sales increased 5.4%. The segment had 3,249 points of sales across all regions, which included temporary closures due to the pandemic.

Operating income fell 42.7% year over year, while operating margin expanded 140 bps to 5.5%. The decline in operating income resulted from higher operating expenses, driven by the Health Division’s organic growth in Colombia and Mexico.

FEMSA Comercio — Fuel Division: Total revenues declined 30.6% to Ps. 8,568 million (US$387.5 million). Same-station sales declined 31.5%, driven by a 27.5% fall in the average volume, reflecting reduced mobility due to the pandemic, as well as a 5.6% decrease in the average price per liter. The company had 551 OXXO GAS service stations as of Sep 30, reflecting the addition of 10 stations in the last 12 months. Operating income declined 4.5%, with a 100-bps expansion in the operating margin to 3.7%, driven by tight expense control and increased expense efficiencies.

Coca-Cola FEMSA: Total revenues for the segment declined 4% year over year to Ps. 46,734 million (US$2,113.7 million). On a comparable basis, revenues remained flat. Coca-Cola FEMSA’s operating income improved 1.5%, while comparable operating income was up 7.1%. The segment’s operating margin expanded 80 bps to 15.2% on efficiencies in labor, maintenance and marketing expense across the operations as well as tax reclaims in Brazil.

National Beverage Corp. (FIZZ - Free Report) delivered an earnings surprise of 26.6%, on average, in the trailing four quarters. It sports a Zacks Rank #1 (Strong Buy) at present. You can see the complete list of today’s Zacks #1 Rank stocks here.

What's in the Cards for NRG Energy's (NRG) Q3 Earnings?