Stericycle, Inc. (SRCL - Free Report) reported impressive third-quarter 2020 results, beating the Zacks Consensus Estimate on both earnings and revenues. The better-than-expected results however failed to impress the market as there has not been any major price change since the earnings release.

Adjusted earnings per share of 68 cents beat the Zacks Consensus Estimate by 19.3% but declined 15% year over year. Earnings fell due to an unfavorable impact of 12 cents from divestitures and foreign-exchange rates, 4 cents from lower income from operations and 7 cents from higher adjusted tax rate.  These were partially offset by a benefit of 11 cents from lower interest expenses.

Revenues of $636.4 million marginally beat the consensus mark and decreased 23.6% year over year. The downfall was due to divestitures that hurt revenues by $162 million, and lower Secure Information Destruction that impacted revenues by $36.6 million. Revenues were down $4.3% on an organic basisdue to the COVID-19 pandemic.

Notably, Stericycle’s shares have gained 14.9% over the past year against 7.9% decline of the industry it belongs to. 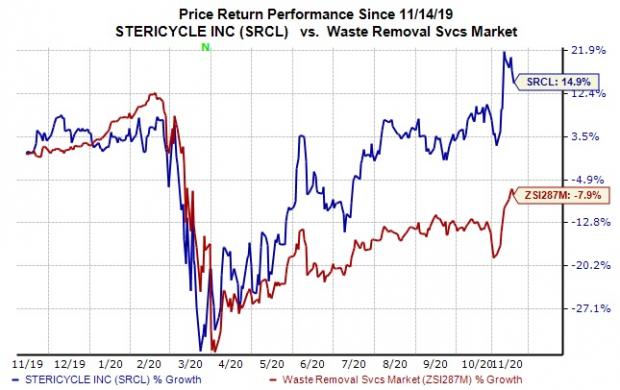 Let’s delve deeper into the numbers

Regulated Waste and Compliance Services revenues decreased 24.7% year over year on a reported basis but increased marginally on an organic basis to $415.5 million. The segment contributed 65% of total revenues.

Secure Information Destruction revenues declined 15.9% year over year on a reported basis and 16.8% organically to $187.3 million. The segment contributed 30% to total revenues.

Communication and Related Services revenues fell 43% year over year on a reported basis and 2.9% organically to $33.6 million. The segment contributed 5% of total revenues.

Revenues from North America were $517.1 million, down 25.3% year over year on a reported basis and 4.7% organically. The region contributed 81% of total revenues.

International revenues of $119.3 million fell 15.5% year over year on a reported basis and 2.5% organically. The region contributed 19% of total revenues.