This nod from the regulatory body marks Keytruda’s first approval in the breast cancer setting. Per the company, TNBC is an aggressive and difficult-to-treat cancer, which affects around 15-20% breast cancer patients.

The accelerated approval was based on progression-free survival (PFS) data from the phase III KEYNOTE-355 study, which evaluated Keytruda in combination with three different chemotherapy regimens, namely paclitaxel, nab-paclitaxel or Eli Lilly’s (LLY - Free Report) Gemzar (gemcitabine) and carboplatin in the given patient population.

Data from the study showed that the Keytruda combo significantly reduced the risk of disease progression or death by 35% versus the same chemotherapy regimens alone in TNBC patients whose tumors express PD-L1. The combo regimen significantly improved PFS in the given patient population.

Notably, the continued approval for the TNBC indication may be contingent upon verification and description of clinical benefit in the confirmatory studies.

Shares of Merck have declined 10.8% so far this year against the industry’s increase of 1.1%. 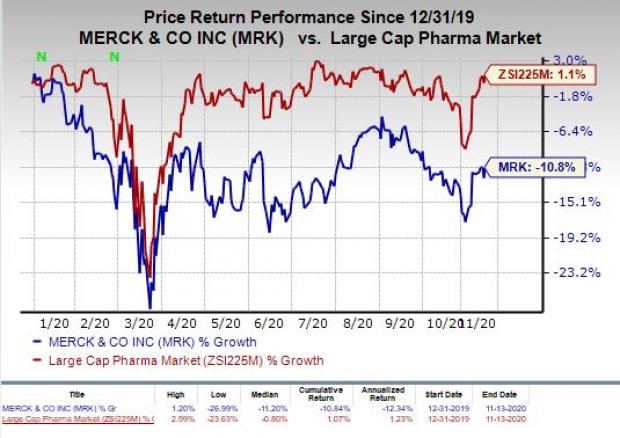 Merck’s biggest product Keytruda is already approved for treating 30 indications across several different tumor types in the United States. The drug is currently being evaluated in more than 1,300 studies for addressing a wide variety of cancers and treatment settings.

Keytruda recorded sales worth $10.38 billion in the first nine months of 2020, up 30.3% year over year. The drug’s sales have been gaining from continued label expansions and its uptake for newer indications.

Meanwhile, the Keytruda development program is also progressing well with Merck spending billions on the research and development of this medicine to secure more approvals in the earlier lines of treatment. The drug is being studied for more than 30 types of cancer in above 1300 studies including 900 plus combination studies. Merck is collaborating with several companies including Amgen (AMGN - Free Report) , Incyte, Glaxo and Pfizer (PFE - Free Report) separately for the evaluation of Keytruda in combination with other regimens.