Polaris Inc. (PII - Free Report) recently announced that its chairman and CEO Scott Wine will depart from the company to assume the CEO’s role in European tractor maker CNH Industrial (CNHI - Free Report) . Wine will retain his current role at Polaris through the end of the year to give the company time for the transition. Management will announce his successor at a later date.

As news of Wine stepping down became public, shares of Polaris slid more than 9% in the after-hours session.

Wine, who became CEO of Polaris in 2008, was elected as chairman of the board in 2013. He has held executive positions at United Technologies, Danaher and Allied Signal as well.

Wine has capitalized on growth of powersports in the United States owing to which Polaris evolved from a $1.9-billion organization to approximately a $7-billion global powersports company. Under his supervision, sales of this Minnesota-based maker of snowmobiles, off-road vehicles and motorcycles have more than tripled, while its shares have also more than quadrupled in value. The company was also able to sail through President Trump’s trade wars and the coronavirus pandemic-induced supply-chain crisis during his tenure. He also revived Indian Motorcycles, subsidiary company of Polaris, to compete with rival Harley-Davidson (HOG - Free Report) .

Per Polaris’ lead independent director John Wiehoff, Scott had been a terrific leader for the company, and was a pioneer in assembling an experienced and highly capable executive team. Together with his team, Wine laid down an exceptional strategy to pave the way for Polaris’ continued growth.

Though the departure of Wine might create short-term hiccups for the company, the board seems fairly optimistic for the remainder of the year and into 2021.

In fact, the powersports maker reiterated its previously-issued guidance for full-year 2020 sales and adjusted earnings to ensure investors’ confidence in the company remains intact. Adjusted net income is expected in the range of $7.15-$7.30 per diluted share for the current year, indicating a 13-16% increase, year over year, on a 2-3% anticipated sales growth compared with the prior year’s adjusted sales of $6,783 million.

Currently, Polaris — peers of which include BMW AG (BAMXF - Free Report) and Honda — holds a dominant position in the powersports market, and designs, engineers and manufactures off-road and on-road vehicles. The company has a diverse portfolio mix consisting of more than 30 brands. In its quest of being a customer-centric company, Polaris has continually invested in product research & development, focused on developing breakthrough technology and digital offerings. It has also expanded its foothold into newer and adjacent markets, including Boats and Aftermarket.

The company currently carries a Zacks Rank of 2 (Buy). You can see the complete list of today’s Zacks #1 Rank (Strong Buy) stocks here.

Notably, shares of the company have declined 4.7%, year to date, while the industry has rallied 141.5%. 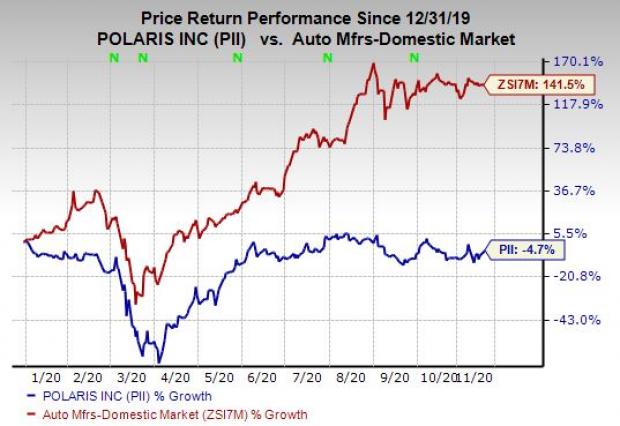