Work related to the deal will be performed in Bath, ME, and is scheduled to be completed by January 2022.

With growing demand for this warship,  General Dynamics is witnessing a steady flow of contracts. Similarly, in June 2020, Huntington Ingalls (HII - Free Report) , another contractor for DDG-51, secured a $936 million deal for the construction of an Arleigh Burke class ship.

Notably, this warship’s importance continues to grow as these ships offer a wide range of advanced warfighting capabilities in multi-threat air, surface and subsurface environments.  It also offers protection against a wide range of threats, including ballistic missiles.

General Dynamics has been serving the U.S. Navy by constructing and delivering next-generation combat ships for decades. Being the Navy's primary surface combatant, the DDG 51 destroyers enjoy solid demand in the United States. Such steep demand places General Dynamics at an advantageous position in the shipbuilding business, with the company being the lead designer and builder of DDG 51.

Per a report released by the U.S. Department of Defense, the fiscal 2021 defense budget includes a spending provision of $32.3 billion for the maritime domain on a whole. The allotted budget specifically includes the requirement of two DDG-51 Arleigh Burke Destroyers. Such favorable budgetary projections bode well for major shipbuilders like General Dynamics, as it increases the company’s possibility of winning more shipbuilding and associated contracts.

General Dynamics’ stock slipped 17.4% in the past year compared with its industry’s decline of 28.9%. 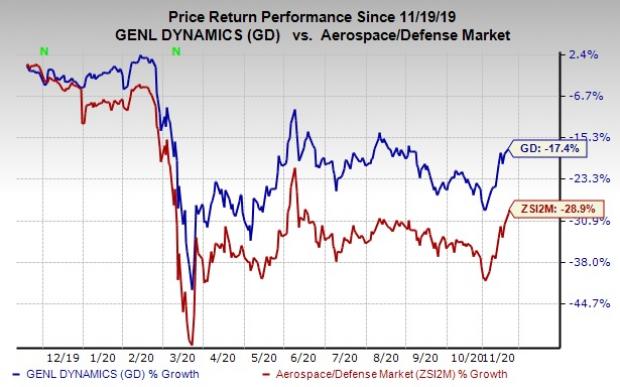 BlackBerry (BB) QNX Software to Boost Plus' Self Driving Trucks