Dollar General (DG - Free Report) has outpaced its larger rivals Target (TGT - Free Report) and Walmart (WMT - Free Report) in 2020, but it has lagged both the discount retailers in the past three months. Luckily, Target’s recent Q3 results showcased that big retailers are still cruising along during the pandemic. And Dollar General will get its chance to remind Wall Street about its growth and potential when it reports its third quarter financial results on December 3.

Dollar General isn’t necessarily a direct rival to Walmart, Target, or Costco (COST - Free Report) even though they are all often categorized as discount retailers. DG operates nearly 17,000 smaller format stores across most of the U.S., often in more rural and working-class areas. Meanwhile, Target has around 1,900 stores and Walmart has roughly 5,000 in the U.S

DG sells everything from food to motor oil for “everyday low prices,” unlike rival Dollar Tree’s (DLTR - Free Report) $1 for everything pitch. And it is not controversial to say that it is much more of a true discount store than Walmart and Target.

Investors should pay close attention to the fact that Dollar General has succeeded in the e-commerce age by expanding its brick and mortar footprint in areas where Amazon (AMZN - Free Report) boxes aren’t the norm. This could be vital to its continued growth and expansion for years to come. But Dollar General is, of course, adapting with the times, even though it hasn’t gone all-in on delivery.

Dollar General has improved its digital ecosystem and it’s rolling out offerings like order online and pick up in store. Something that is also likely to resonate with its customers is its relatively new app that allows consumers to scan items as they shop to make sure they stay on budget and help find digital coupons. And in select stores, customers “can pay-in-app and skip the checkout line.” 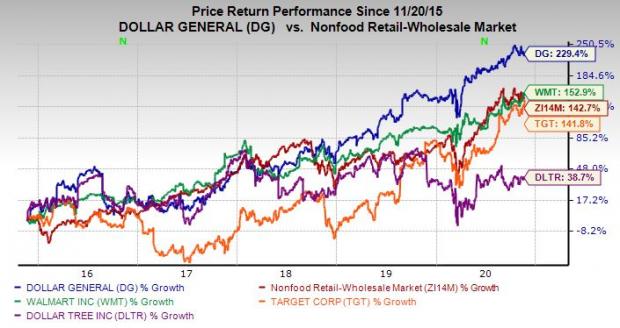 But as we mentioned at the top, Dollar General has cooled off a bit, down over 3% in the last month. The stock closed regular trading Thursday at $211.21 a share, which puts it about 6% off its mid-October records. This could give it room to climb as Wall Street just pushed Target stock up to new highs for its ability to continue big growth during the coronavirus.

Despite its outperformance, DG trades at a discount in terms of forward 12-month earnings compared to its industry’s 34.7X and Target’s 21.8X at 21.1X. Meanwhile, the company’s 0.68% dividend yield comes in not too far below the 10-year U.S. Treasury’s average. And in a sign of strength amid broader economic uncertainty, DG resumed its share repurchase plan during the second quarter.

Last quarter, DG’s revenue jumped over 24% and same-store sales popped 19%, while its operating profit surged 81% to $1 billion. Peeking ahead, Zacks estimates call for Dollar General’s Q3 sales to jump over 14% to $8 billion to hep lift its adjusted earnings by 39%.

DG’s overall fiscal 2020 sales are projected to jump 19% to come in at roughly $33 billion, with its adjusted EPS expected to soar over 50%. This would represent its strongest growth since 2012’s 14% revenue climb.

Dollar General easily beat our earnings estimates in the last two periods and its strong bottom-line revisions help it grab a Zacks Rank #2 (Buy) right now. DG also sports “B” grades for Growth and Momentum in our Style Scores system and its industry sits in the top 30%, as we enter the thick of the holiday shopping season.