Why Should You Add Hartford Financial (HIG) to Your Portfolio?

The company has witnessed its 2020 earnings estimate move 14.2% north over the past 30 days.

Its return-on-equity (ROE) reflects growth potential. The company’s trailing 12-month ROE of 12.2% compares favorably with the industry average of 7.7%, mirroring its efficiency in utilizing its shareholders’ funds.

Shares of this currently Zacks Rank #2 (Buy) company have gained 23.1% in the past six months, underperforming its industry's growth of 24.1%. You can see the complete list of today’s Zacks #1 Rank (Strong Buy) stocks here. 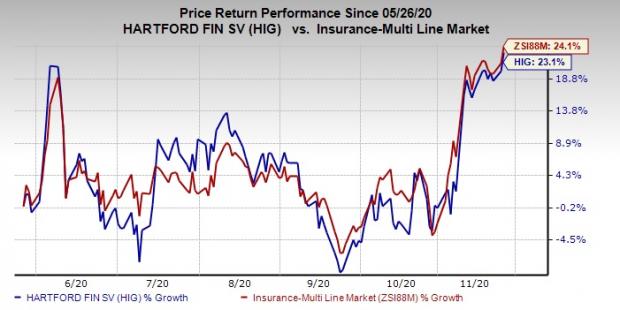 The company is expected to make progress, evident from its favorable VGM Score of A. Here V stands for Value, G for Growth and M for Momentum with the score being a weighted combination of all three factors.

Now let’s see what has been working in the stock’s favor.

The company has been taking strategic initiatives over time to improve its risk profile. A series of well-executed strategic dispositions of its legacy run-off businesses also helped the company. Hartford Financial has been vending non-core businesses for a while now to concentrate on its U.S. operations and enhance its operating leverage. These divestitures aided the company to lower its expenses, boost profitability and even increase returns to its shareholders. All these calculated actions bode well for the long haul.

The company has been making diligent efforts to solidify its portfolio through acquisitions. Its 2019 buyout of Navigators Group enabled the company to enhance its product offerings and geographic reach. It also strengthened it commercial business lines.

The company's capital position too remains impressive. Total debt is 24.4% (almost unchanged from the sequential figure) of its total equity, lower than the industry average of 42.8%. It undertook several measures to bolster its liquidity. Its time interest earned stands at 9.8X, above the industry's average of 3.1X. Thus, its financial flexibility looks encouraging.

Hartford Financial’s capital appreciations, repayment of government funds and measures to de-risk its balance sheet boosted its financial footing. It also boasts an intelligent capital management policy, featuring share buybacks and dividend hikes. The company’s dividend was upped 200% over the 2013-2018 period. Its dividend yield stands at 2.7%, above the industry's average of 2.4%. Credit performance on the portfolio was strong during the third quarter.

Although the company paused its share buyback program in response to the current volatile environment, it is continuing with its dividend payouts, which makes us positive about its capital deployment strategy. This should instill investors’ confidence in the stock.

The company flaunts a stellar surprise history. Its earnings managed to beat estimates in all the trailing four quarters, the average being 18.4%.

Investors interested in the insurance space can also take a look at some other top-ranked stocks, such as Old Republic International Corporation (ORI - Free Report) , AMERISAFE, Inc. (AMSF - Free Report) and Aflac Incorporated (AFL - Free Report) , each presently carrying a Zacks Rank of 2.

Old Republic International Corporation is an insurance holding company. Its earnings managed to surpass estimates in all the trailing four quarters, the average being 49.2%.

AMERISAFE is a specialty provider of workers’ compensation insurance, which markets and underwrites its insurance through subsidiaries. Its bottom line managed to surpass estimates over the last four quarters, the average being 64.8%.

Aflac is a general business holding company and oversees the operations of its subsidiaries by providing management services and making capital available. Its earnings managed to deliver a surprise of 14.8%, on average, over the last four quarters.