Shares of Nordstrom, Inc. (JWN - Free Report) gained more than 7% after the close of the trading session on Nov 24, following its third-quarter fiscal 2020 results. The stock momentum can be attributed to the company’s bottom line beat in the fiscal third quarter, although sales lagged the Zacks Consensus Estimate.

However, both top and bottom lines declined year over year. Results were affected by the continued impacts of COVID-19 and soft store traffic stemming from the ongoing situation. Despite the decline, the company’s results reflected an improvement on a sequential basis.

Moreover, the company tracks ahead of the target of $750 million in annual cash savings, net of COVID-19-related charges, driven by strong execution of its plans to create a leaner and more efficient organization. Notably, it has generated $550 million of cash savings year to date, including $330 million of cost savings. This led to a nearly 20% reduction in overhead costs in the fiscal third quarter.

The company expects to sustain the strong momentum in fourth-quarter fiscal 2020 and beyond. Moreover, it is optimistic about its inventory levels, which are current and on-trend. With stores back in operation and potential healthy demand for the holiday season, management foresees positive EBIT and solid cash flow for the fourth quarter. However, EBIT margin is likely to decline on a sequential basis due to higher promotions and elevated shipping costs. 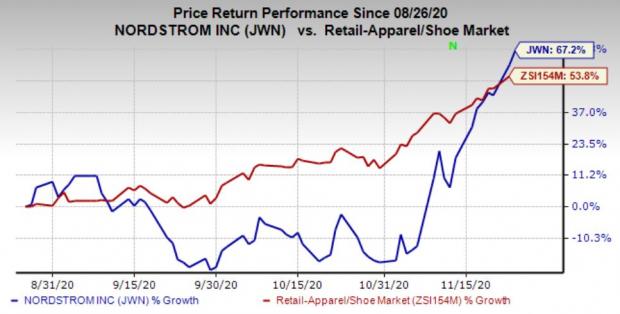 Nordstrom posted adjusted earnings of 22 cents per share, beating the Zacks Consensus Estimate of 1 cent. The bottom line gained from positive customer demand during its Anniversary Sale, which led to higher sell-through rates. Also, improved merchandise margins and overhead cost reductions of nearly 20% aided the bottom line. However, the figure reflected a decline of more than three-fold from 81 cents reported in the last-year quarter.

Total revenues declined nearly 16% to $3,089 million and lagged the Zacks Consensus Estimate of $3,109 million. Net sales fell 16% to $3,002 million, while Credit Card net revenues declined 18% to $87 million. During the quarter, strength in merchandise categories, including active, home, beauty and designer, along with a favorable impact related to the shift in the Anniversary Sale event from second to third quarter aided quarterly sales.

Nordstrom's gross profit margin contracted 150 basis points (bps) to 32.8% in the reported quarter. This downside was due to the shift in the timing of the Anniversary Sale event and reduced sales volume. However, gross margin reflected some gains from sequential improvement in merchandise margin trends. Ending inventory declined 27% from the last year. Excluding the Anniversary Sale event shift impact, the decline in inventory was in line with the fall in sales.

Meanwhile, selling, general and administrative (SG&A) expenses, as a percentage of sales, grew 30 bps to 32.1% in the fiscal third quarter.

Further, EBIT for the reported quarter declined 45.1% to $106 million due to a decline in sales volume as a result of temporary store closures, which more than offset gains from realized expense savings.

Nordstrom ended the quarter with cash and cash equivalents of $889 million, long-term debt (net of current liabilities) of $2,767 million, and total shareholders’ equity of $252 million.

The company used $436 million of net cash from operating activities and spent $311 million as capital expenditure in the nine months ended Oct 31, 2020.

However, it generated an operating cash flow of more than $155 million in third-quarter fiscal 2020. This enabled the company to pay down $300 million on its revolving line of credit. Consequently, the company ended the quarter with a strong balance sheet, having total liquidity of $1.5 billion, including $900 billion in cash. Further, it realigned inventory levels and reduced overhead expenses by nearly 20%.

Management remains on track to gain market share, optimize the inventory and expand the customer base. In this context, the company launched its market strategy to five additional markets, wherein customers can avail increased merchandise selection with two-day delivery or next-day pickup facilities. It also introduced pick up options for Nordstrom.com, Nordstromrack.com and HauteLook.com orders from all Nordstrom and Nordstrom Rack stores across the United States.

Further, Nordstrom is making efforts to boost Nordstrom Rack via improved digital services, as Rack rakes in the largest number of new customers. It has expanded the buy online pickup in store facility to almost 350 locations across both Nordstrom and Nordstrom Racks. On the store-front, it opened its fourth local Nordstrom service hub in Los Angeles and intends to open the fifth one later this year.

3 Stocks to Watch in the Retail Space

The TJX Companies (TJX - Free Report) has a long-term earnings growth rate of 10.5% and a Zacks Rank #2 (Buy). You can see the complete list of today’s Zacks #1 Rank (Strong Buy) stocks here.

The Kroger Co. (KR - Free Report) has an impressive long-term earnings growth rate of 6.2% and a Zacks Rank #2.