Colfax (CFX) to Gain From Products & Buyouts Amid Pandemic Woes

We have issued an updated research report on Colfax Corporation (CFX - Free Report) on Nov 26.

The company is based in Fulton, MD, and currently has a $4.5-billion market capitalization. It makes and distributes products related to fabrication technology and medical technology as well as provides related services. The company presently carries a Zacks Rank #3 (Hold).

The company belongs to the Zacks Manufacturing - General Industrial industry, which comes under the Zacks Industrial Products sector. The industry is in the top 35% (with a rank of 89) of more than 250 Zacks industries.

Sequential Projections and Consensus Estimate Trend: Colfax’s earnings and sales performance in the third quarter of 2020 were better than expected. Earnings and sales beat in the quarter were 2.5% and 6.1%, respectively.

In the quarters ahead, Colfax is poised to benefit from a solid business portfolio, product innovation and healthy business system. Also, its exposure in multiple end markets, including mining, petrochemical, general industrial, marine, power generation and others, enables it to offset weakness in some markets with strengths in the others.

For the fourth quarter of 2020, the company anticipates a 0.5-2.5% increase in its sales from the third quarter of 2020. Also, adjusted earnings are predicted to be 45-50 cents, suggesting a rise from 41 cents recorded in the previously reported quarter. Also, the company is focused on improving its free cash flow, anticipates generating $130 million in the second half of 2020.

Capital Allocation: The company effectively uses its capital to invest in product innovation, productivity actions, making acquisitions (explained in the point below) and lowering debts.

In the long run, the Medical Technology segment is likely to benefit from population increase, active lifestyles, easy access to healthcare, aging and sports. Product launches in the past few months — including DonJoy VersaRom Hip Brace, Motion iQ, AltiVate Anatomic CS Edge and EMPOWR Partial Knee — might be beneficial too.

Further, exposure in emerging markets, infrastructural investments and industrial production might aid the Fabrication Technology segment in the long run. Its product launches, including Aristo 500ix & Robust Feed U6 and GCE ProControl, in the past few months as well as savings from restructuring actions are expected to aid the segment.

In relation to lowering debts, it is worth noting here that Colfax repaid $866 million of its borrowings in the first three quarters of 2020. Exiting the third quarter, its long-term debts were $2,191.7 million. Also, its times interest earned and total debt to total capital were at 1.8X and 39.1%, respectively. Notably, these metrics compare favorably with debts of $2,220.9 million, times interest earned of 1.4X and total debt to total capital of 39.8% at the end of second-quarter 2020.

The buyout is expected to be completed in the fourth quarter of 2020 and will mark the company’s entry into the foot and ankle market. Revenues of $20 million are anticipated from this buyout in the first year of completion.

Share Price Performance and Pandemic Woes: Market sentiments seem to be working against Colfax for quite some time now. Year to date, the company’s shares have gained 4.3% compared with the industry’s growth of 9.6%. During the same timeframe, the sector has expanded 15.8% and the S&P 500 has grown 12.9%. 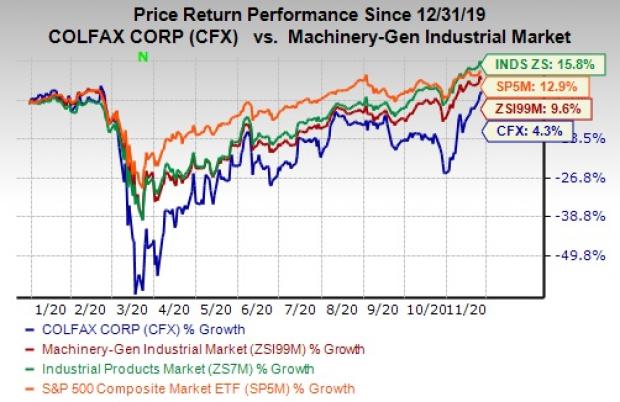 The pandemic adversely impacted the company’s demand in the third quarter of 2020, as evident from a 3.2% fall in its existing businesses in the quarter. For the fourth quarter as well, it is wary about the pandemic’s ill-effects on its operations.

Also, daily sales are expected to be down 4-6% year over year for Fabrication Technology in the fourth quarter and decline 2% to flat for Medical Technology.

Forex Woes and Peers: Colfax carries out its operations in multiple countries, including South America, the United States, Asia, Europe and the Middle East. International diversification has exposed it to unfavorable movements in foreign currencies, geopolitical issues, local competitive pressure and macroeconomic challenges. Forex woes adversely impacted the company’s third-quarter sales by 1.6% year over year. Notably, it expects forex woes to hurt its sales by 1% in the fourth quarter.

Colfax faces competitive pressures from some players in the industry, including Lincoln Electric Holdings, Inc. (LECO - Free Report) and Illinois Tool Works Inc. (ITW - Free Report) . In the past 60 days, earnings estimates for these stocks have improved for the current year. Further, earnings surprise for the last reported quarter was 39.24% for Lincoln Electric and 26.21% for Illinois Tool.