scPharmaceuticals Inc. (SCPH - Free Report) announced that the FDA has issued a complete response letter to its new drug application ("NDA") through which it sought approval for its pipeline candidate, Furoscix (subcutaneous furosemide injection).

The company is developing the candidate as outpatient self-administration for the treatment of congestion due to fluid overload in adult patients with worsening New York Heart Association (NYHA) Class II and Class III heart failure, displaying reduced responsiveness to oral diuretics and who do not require hospitalization.

The regulatory agency stated in the letter that it was unable to conduct pre-approval inspections at two of the company’s third-party manufacturing facilities due to travel restrictions. Moreover, the FDA raised questions related to testing, labeling, and features of the combination product unrelated to the drug constituent in the CRL. In addition, the FDA indicated deficiencies at the company’s third-party facility manufacturing its off-the-shelf alcohol swabs. However, there were no clinical deficiencies identified in the CRL.

Shares of scPharmaceuticals plunged 35.6% following the announcement as this will delay potential approval of Furoscix. The company’s shares have lost 0.6% so far this year against the industry’s increase of 5.8%. 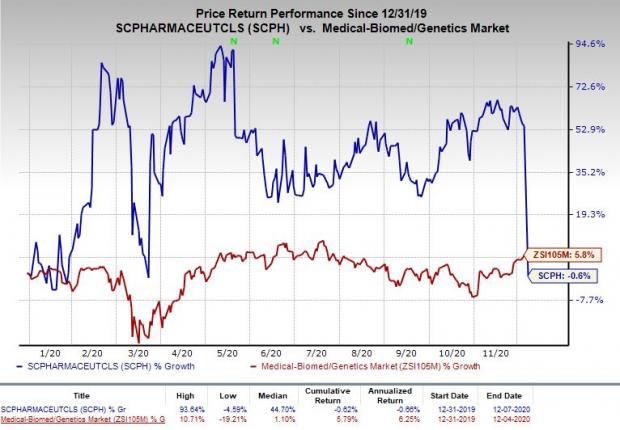 Meanwhile, the company plans to request a Type A meeting with the FDA for discussing the issues described in the CRL and steps required for the resubmission of the Furoscix NDA

We note that the previous NDA for Furoscix had also received CRL from the FDA in June 2018, followed by a resubmission in June 2020 with PDUFA date of Dec 30, 2020, a delay of two-and-a-half years. The company has no approved product in its portfolio and the recent CRL for Furoscix NDA will delay generation of potential revenues, as the company stated that it will be unable to respond to the agency’s concerns by the year-end.