Valued at $507 million, this contract will be executed at Stratford, CA. The deal has been awarded by the U.S. Army Contracting Command, Redstone Arsenal, AL.

UH-60M is the primary medium lift helicopter for the U.S. Army, performing a wide range of missions that encompass air assault, MEDEVAC, CSAR, Command and Control, and VIP transport. HH-60M is the MEDEVAC aircraft used to extract wounded troops from the battlefield.

With Sikorsky’s combat-proven copters capturing a major share of the military helicopter space, thanks to their advanced mission capabilities, the Black Hawk helicopter family, to which Uh-60M and HH-60M belong, enjoys decent demand across the globe. The latest contract win an example of that.

Notably, more than 4,000 Black Hawk aircraft of all types are in service worldwide today. The U.S. Army is the largest operator with 2,135 H-60 designated aircraft.

With the geopolitical situation expected to worsen in the coming days, demand for combat helicopters will continue to rise, thereby improving growth prospects for Lockheed’s Sikorsky business unit.

Interestingly, Sikorsky is expected to deliver more than 950 UH-60M aircraft to the U.S. Army by 2025. Additionally, the army plans to buy more than 400 HH-60M MEDEVAC aircraft used to extract wounded troops from the battlefield. So, we expect to witness more such contract flows from Pentagon involving these two Black Hawk variety jets in the coming days, which in turn should boost this defense contractor’s revenue growth.

As far as the international market is concerned, per a Morder Intelligence report, the global attack helicopter market is expected to witness CAGR of more than 4% during 2020-2025, which bodes well for major combat helicopter manufacturers like Lockheed, Textron (TXT - Free Report) and Boeing (BA - Free Report) .

Lockheed Martin’s stock lost has 6.4% in a year compared with the industry’s decline of 24.6%. 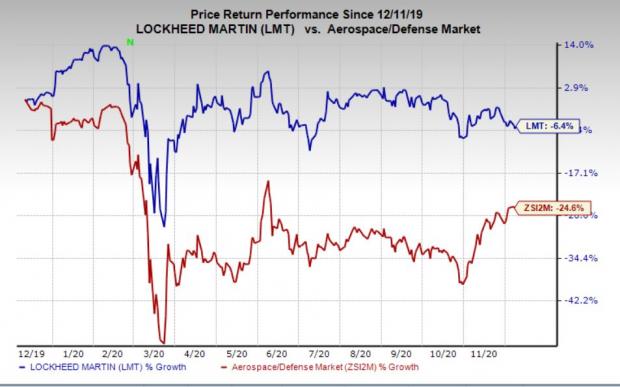 AeroVironment’s earnings surpassed the Zacks Consensus Estimate in the last reported quarter by 60%. The company’s earnings growth for next fiscal year is estimated to be 15%.