Volkswagen (VWAGY - Free Report) recently announced that the company is facing a major production disruption due to a global shortage of semiconductor components required for car electronics.

The German-based automaker even stated that it will be delaying production at its factories in Europe, China and the United States due to the worldwide shortage of automotive microchips. This decision will hamper production of Volkswagen Passenger Cars, Volkswagen Commercial Vehicles, Skoda, Seat and Audi build on the company’s MQB platform.

Semiconductors are silicon chips that perform control and memory functions, and are indispensable components of high-performing computer chips that power electronic devices like computers, mobile phones and other gadgets. With vehicles on the road becoming more like computers on wheels, automobiles are vastly automated, and require semiconductors for various applications like engine controls and automatic braking systems.

When the coronavirus pandemic hit the economy, the auto sector bore severe brunt of the crisis, with auto sales hitting rock bottom in the second quarter of 2020. Amid the tanking auto sales, semiconductor manufacturers shifted their production capacities to other sectors such as consumer electronics.

Nonetheless, with the global economy gradually recovering from the mayhem caused by the pandemic, auto sales managed to rebound faster than expected, especially in China, the world’s largest car market. This encouraged major automakers to ramp up production and replenish weak inventories at dealerships.

As a result, Volkswagen, world’s leading automaker, will have to slowdown production at its factories in China, Europe and North America, in order to adapt to the supply situation in the first quarter of 2021. Moreover, the situation continues to be unstable as the reallocation of electric components to minimize the impact might disrupt the assembly of other vehicles not directly affected by the shortage crisis.

Volkswagen has managed to remarkably handle the supply-chain situation till date owing to its excellent procurement and production management. Nevertheless, the company is now feeling burdened with the global semiconductor deficit issue which could prevent it from getting off to a smooth start next year. In fact, the automaker as well as German auto-parts suppliers, like Robert Bosch and Continental, expect that the supply issue could run into 2021 as well.

Nonetheless, Volkswagen is continuously reviewing countermeasures in a bid to limit the adversities and the number of vehicles affected caused by the supply-chain bottleneck, and ensure that smooth vehicle deliveries can be resumed as soon as possible.

Volkswagen, peers of which include Honda (HMC - Free Report) and Toyota, currently carries a Zacks Rank of 3 (Hold). You can see the complete list of today’s Zacks #1 Rank (Strong Buy) stocks here.

Shares of the company have appreciated 4.3% year to date compared with the industry’s rise of 20.1%. 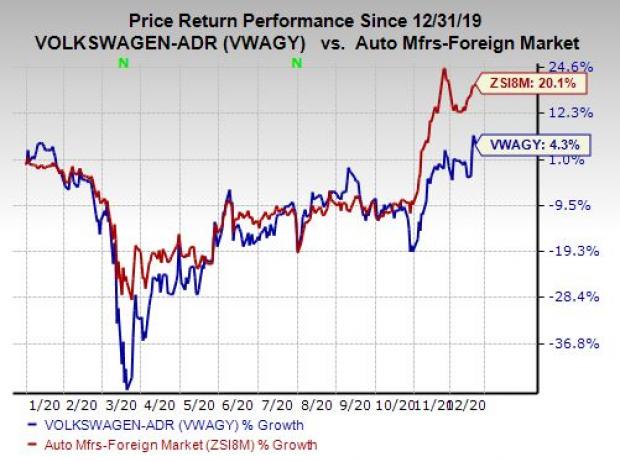