On Dec 21, we issued an updated research report on The Middleby Corporation (MIDD - Free Report) . 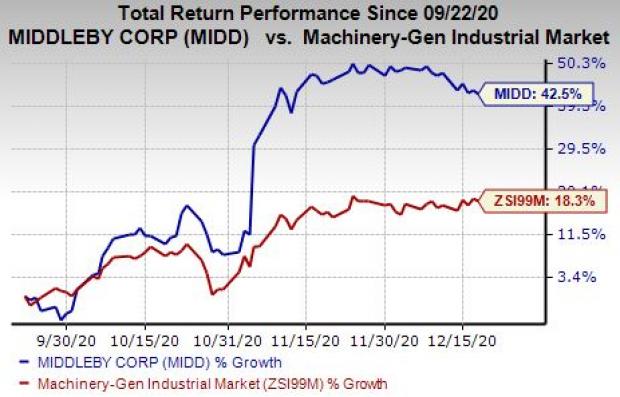 Middleby is poised to benefit from revival of its restaurant business and higher preference for automated cooking systems, beverage systems and ventless products in the quarters ahead. Also, investments in product innovation and technological advancement actions, along with its digital marketing and sales initiatives, are likely to be beneficial.

Also, the company’s acquisition of RAM Fry Dispensers (January 2020) has been enhancing its product offerings in the restaurant automation platform. Also, its Deutsche Beverage buyout (March 2020) is helping it strengthen product offerings in the beverage platform. In addition, the Wild Goose Filling (December 2020) buyout will create strong growth opportunities for Middleby in the canned beverages market. Notably, acquired assets boosted the company’s sales by 2.3% and 1.1% in the second and third quarters of 2020, respectively.

Also, Middleby’s robust liquidity position allows it deal with the difficulties caused by the coronavirus outbreak. In the third quarter of 2020, the company’s free cash flow increased 24.5% to $144.4 million on a year-over-year basis. In addition, its cash and cash equivalents were $220.3 million exiting the quarter, up from $94.5 million at 2019-end.

However, weakness across its end markets on account of the coronavirus outbreak-led issues weighs on its top line in the near term.

Moreover, Middleby’s high-debt profile poses a concern. For instance, in the last three years (2017-2019), its long-term debt rose 22.2% (CAGR). Notably, the metric remained high at $1,809 million exiting the third quarter. Also, the company’s weakening ability to repay its debts is concerning. Notably, its times interest earned at the end of third-quarter was 5.6x, down from 5.8x at the end of second quarter. Any further increase in debt levels can raise its financial obligations.

Altra Industrial delivered a positive earnings surprise of 50.07%, on average, in the trailing four quarters.

Applied Industrial delivered a positive earnings surprise of 14.68%, on average, in the trailing four quarters.

Dover delivered a positive earnings surprise of 18.10%, on average, in the trailing four quarters.