Clearway (CWEN) to Expand Renewable Base Via Investments

Clearway Energy Inc. (CWEN - Free Report) announced that it will co-invest in nearly 1,204 megawatt (MW) of renewable projects, which are being developed by Clearway Energy Group. The renewable projects include 1,012 MW from five wind, solar, and solar plus storage assets under development, along with the 192-MW Rosamond Central solar project that is expected to commence operations by the end of the year.

Clearway amended the existing partnership agreement for 419-MW Mesquite Star wind project with Clearway Energy Group. This will provide Clearway with an additional 27.5% of the project’s cash flows after first-half 2031.

Clearway is expected to invest $214 million by 2022-end for enjoying the benefits from the diverse renewable projects. On Dec 21, 2020, the company acquired a 50% cash equity interest in 192-MW Rosamond Central solar project for $23 million.

Nearly 90% of the generation from the renewable projects is already being contracted from a diverse group of customers and the portfolio has a greater than 14-year blended average contract length. This in a way will ensure steady earnings and boost cash flow generation for Clearway over the long-term period.

Clearway has a long-term objective of expanding operations through the acquisition of generation assets from third parties. The company believes that its knowledge of the market and operating expertise will provide it with a competitive advantage and boost cash flow.

Clearway has already acquired 80 MW of solar projects from Clearway Energy Group under the Right to First Offer mode. It made an agreement to acquire two wind projects having a combined capacity of 199 MW, out of which the Rattlesnake project will start operation from 2020 and Pinnacle Wind Repowering will kick start from 2021.

Per the recent release from the U.S. Energy Information Administration, electricity generation from renewable energy sources is expected to increase from 18% in 2019 to 20% in 2020 and further to 22% in 2021. The expansion of renewables’ share in total generation is the result of planned additions to wind and solar generating capacity.

Utility operators are gradually shifting from traditional fossil fuel-based electricity generation and focusing more on clean sources. NextEra Energy (NEE - Free Report) is investing heavily to expand the renewable portfolio, and currently has 13 GW of wind and solar projects in backlog. Dominion Energy’s (D - Free Report) long-term objective is to add 28.3 GW of battery storage, solar, hydro and wind (offshore as well as onshore) projects by 2035, as well as increase the renewable energy capacity by more than 15% per year, on average, over the next 15 years. It is presently developing a 2.6-GW offshore wind project in the United States.

A better-ranked stock in the same space is Ameresco Inc. (AMRC - Free Report) , which holds a Zacks Rank #2 (Buy) at present.

Ameresco delivered an average earnings surprise of 68.6% in the trailing four quarters. The Zacks Consensus Estimate for its 2020 and 2021 earnings has moved up 8.6% and 8.1%, respectively, in the past 60 days.

In the past three months, shares of the company have returned 34.9% compared with the industry’s 16.6% rally. 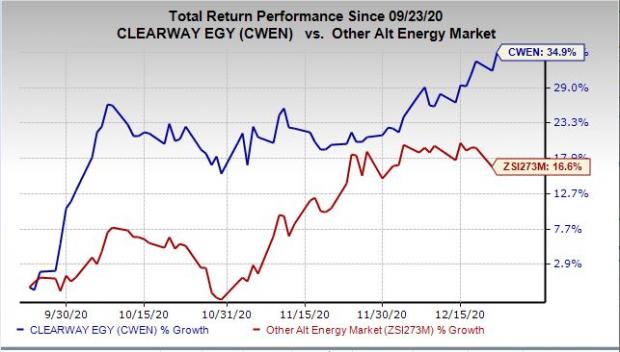 How Effective Will Vaccines be Against New Coronavirus Strain?