Work related to the contract is expected to get completed by Jun 17, 2028.

General Dynamics' Abrams M1A2 is the advanced version of the M1A1 battle tank, which includes a commander's independent thermal viewer, weapon station, position navigation equipment, and a full set of controls and displays, connected by a digital data bus. M1A2 is equipped with an improved fire control system due to these upgrades. The Abrams Tank System continues to be the top tank choice for the U.S. Army, National Guard and Marine Corps as well as several U.S. allies.

Apart from the solid demand that this tank enjoys on the domestic front, it has a robust customer base overseas. Major international militaries of nations like Egypt, Kuwait, Saudi Arabia, Australia and Iraq are the primary customers of the Abrams battle tanks. Therefore, General Dynamics consistently witnesses solid contract flow for Abrams from Pentagon and other U.S. allies. The latest contract win is a bright example of that. In November 2018, the Moroccan government revealed its plans of purchasing 162 Abrams MBT’S worth $1.25 billion, while in January 2019 the U.S, Army awarded a $714 million contract to

General Dynamics for upgrading 174 M1A1 Abrams tanks to M1A2 SEPv3 configuration. Such developments will certainly enable General Dynamics to expand its share in the global market for military tanks.

Per a report by Mordor Intelligence, the MBT market is expected to register a CAGR of more than 3% during 2020-2025. Such growth prospects of the MBT market will surely benefit manufacturers of such battle tanks like General Dynamics, BAE Systems Plc (BAESY - Free Report) and Hyundai Rotem - part of Hyundai Motor Group (HYMLF - Free Report) .

Shares of General Dynamics have plunged about 18.1% in a year compared with the industry’s decline of 26.9%. 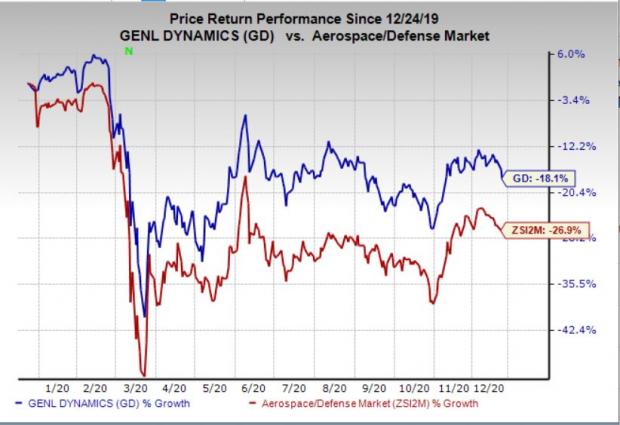 Textron delivered positive earnings surprise of 54.24%, on average, in the last four quarters. The Zacks Consensus Estimate for 2021 earnings indicates annual growth of 44.2%.