The highlight of the last week was Tesla (TSLA - Free Report) hitting a record in deliveries for 2020. Nonetheless, deliveries missed Elon Musk’s target by a whisker. The electric vehicle (EV) behemoth delivered 499,550 vehicles in 2020, narrowly missing the goal of 500,000 units. Delivery count grew 35.7% from the prior year, which is commendable, especially in the light of the coronavirus pandemic. For that matter, last year was rather a remarkable one for most of the EV players.

Flashback to the Week’s Top News

1. Tesla is likely to commence the deliveries of Made in China Model Y shortly. In fact, it has priced Model Y at 339,900 yuan ($52,000), which is lower than the starting price of vehicles offered by rivals like NIO, XPeng and Li Auto. Tesla’s pricing strategy is aimed at providing the automaker a competitive edge over peers in China, thereby boosting sales in the country.

Meanwhile, the red-hot EV maker is set to make its debut in India in early 2021 with the launch of its EVs in the country.Tesla will initially set up its sales network in the country from next year, and based on the demand, the EV pioneer may set up a domestic assembly and manufacturing facility soon. Reportedly, the more affordable Model 3 sedan will be the first EV to enter the India market through the completely built unit route, booking for which is likely to commence in a few weeks. Tesla currently sports a Zacks Rank #1 (Strong Buy).You can see the complete list of today’s Zacks #1 Rank stocks here.

2. Ford (F - Free Report) decided to pull the plug on the proposed automotive joint venture (JV) in India with Mahindra & Mahindra owing to the challenges posed by the coronavirus pandemic. The JV was aimed to bring cost efficiencies for the companies, with the target of launching three utility vehicles and jointly developing EVs for emerging markets. Had the joint venture between Ford and Mahindra materialized, it would have doubled revenues of the former in India. While both the companies have mutually agreed to call off the proposed joint venture, Ford and Mahindra will stick to the original plan for C-SUV — Ford's version of Mahindra's upcoming XUV500 (W605) — for India.

3. Fiat Chrysler  revealed plans to commence the production of hybrid and electric vehicles at the manufacturing plant in Poland in the second half of 2022. The investment is also going to give a big-time boost to Poland’s economy, which is hoping a transit to EVs in order to keep pace with other regional rivals. Reportedly, the auto giant will make an outlay of roughly $204 million for the project in order to scale up and renovate the manufacturing facility in Tychy, Poland, with the objective of eventually producing hybrid and electric versions of Jeeps, Fiats and Alfa Romeo cars. The cars will be equipped with advanced drive systems, including an all-electric drive. In fact, the Italian-American automaker has committed to offer electrified options across its Jeep lineup and invest $10.5 billion in electrification by 2022.

4. Daimler AG’s North American truck arm agreed to pay a $30-million U.S. civil penalty to resolve an investigation of delayed recalls. The National Highway Traffic Safety Administration opened the investigation of roughly 464,000 vehicles in April 2018 associated with Daimler Truck’s handling of seven recalls. Per the investigation results, Daimler Trucks North America failed to recall vehicles in a prompt fashion and adhere to the reporting requirements. Daimler Trucks has agreed to pay $10 million upfront and will outlay an additional $5 million on projects aimed to strengthen vehicle safety. The agreement includes a $15-million deferred fine that can become payable if the automaker fails to obey the consent order. 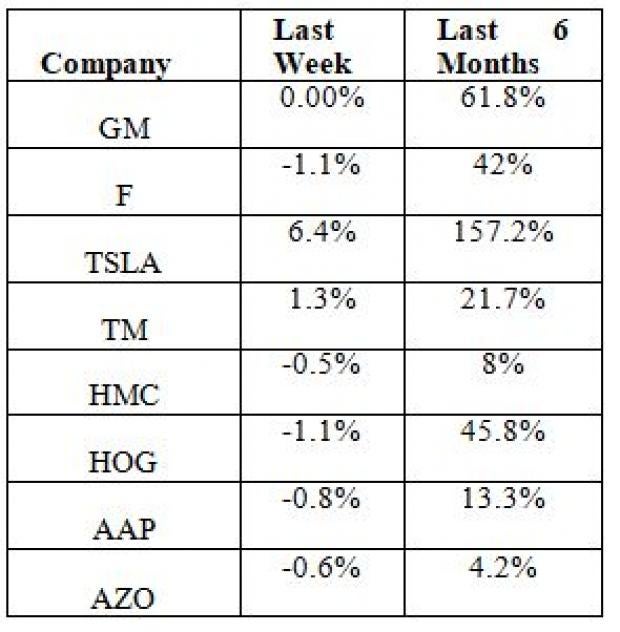 In the past six months, all stocks have increased, with Tesla being the maximum gainer. Over the past week, only Tesla and Toyota have witnessed gains.

Car enthusiasts will be keeping a close watch on December 2020 and full-year U.S. car sales, which will be coming out shortly. Investors in the auto sector would be closely tracking the sales reports of auto biggies including General Motors, Ford, Volkswagen, Honda and Toyota. Meanwhile, industry watchers will also await NIO’s annual day, which will be held later this week on Jan 9. The firm is likely to announce product and service launches during the event.