JPMorgan (JPM - Free Report) is in preliminary talks with China Merchants Bank Co., known as the nation’s “king of retail banking”, to set up a new wealth management joint venture (“JV”). The news was reported by Bloomberg, citing people familiar with the matter.

The talks are private and none of the firms have made any comments. Also, ownership details haven’t been discussed yet. But, according to sources, JPMorgan will not likely have the majority control over this new JV.

Notably, as China’s $53-trillion financial market is now open to foreign firms following the removal of restrictions on ownership, the biggest U.S. bank (in terms of total assets) like other global firms is rushing to capitalize on the opportunity.

JPMorgan has decided to get full ownership of all of its mainland China operations by the end of this year, which is part of its four-year investment plan in the country.

Now that foreign firms are allowed to either gain full control of their mutual fund JVs in China or establish partnerships with local banks in the nation, more than 40 foreign firms have set up JVs, while a few have applied for greater control.

In the latter half of 2020, JPMorgan raised its stake in its China securities JV to 71%, which came after the bank purchased a 20% stake in the JV from one of the local partners — Shanghai Waigaoqiao FTZ — for 177.7 million yuan ($26 million).

Moreover, the Wall Street giant already obtained full control of its futures JV in China, J.P.Morgan Futures Co., after receiving regulatory approval from the China Securities Regulatory Commission to increase the stake to 100% from 49%.

Similar Moves by Other Firms

Firms like Goldman Sachs (GS - Free Report) , Nomura Holdings, Morgan Stanley (MS - Free Report) and UBS Group have either won approval or are waiting for the same to increase stakes in their respective JVs in China.

JPMorgan’s initiatives to expand branch network in new markets will likely continue to support profitability. The acquisition of InstaMed, a strong mortgage banking business and focus on credit card operations are expected to further aid financials.

Shares of JPMorgan have gained 32.5% over the past six months compared with 27.9% growth recorded by the industry. 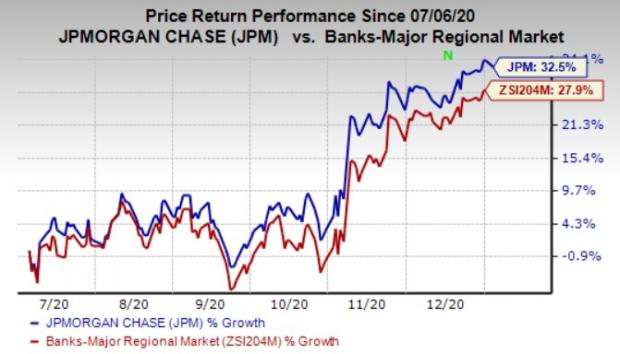