Consumers’ inclination toward digital transactions has put traditional brick-and-mortar stores in dire straits as they struggle to attract footfall. The past year was even more challenging for physical stores as the coronavirus pandemic-led social distancing norms eclipsed traffic turn-up, especially at malls. Moreover, consumers’ tighter pockets led to lower spending on luxury items. The situation has compelled retailers to walk a tight rope, with many resorting to store closures. Macy's, Inc. (M - Free Report) is also one such retailer. This well-known departmental chain has been restructuring its store base to better align with consumers’ altering shopping preferences.

Per media reports, the company is likely to close as many as 45 of its department stores by the middle of this year. The closures are likely to help the company focus on other productive store locations as well as boost digital capabilities. Let’s dive deeper.

Store Restructuring on the Cards

The store closure plans are apparently part of Macy’s previously-announced strategy to shutter nearly 125 stores by the end of 2023. According to market sources, majority of these stores are located in lower tier malls and have been less productive. Sources have also highlighted that the company is striving to rightsize its store fleet by concentrating on well-trafficked higher tier malls.

The need for closing underperforming stores looks justified for the company when considering the sluggish comparable sales performance during third-quarter fiscal 2020. During the period, comparable sales were down 21% year over year, on an owned basis and down 20.2% on an owned-plus-licensed basis. Moreover, store sales plunged nearly 36%. 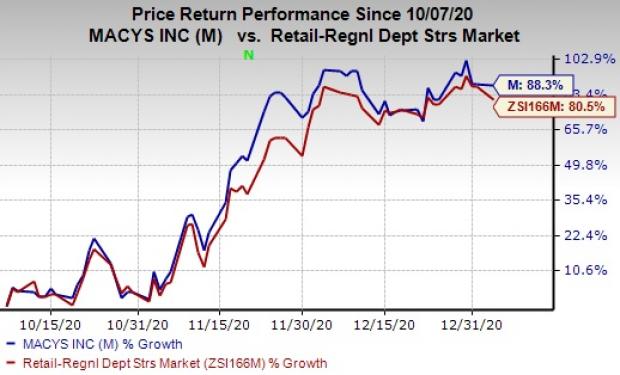 Digital is the Way to Go

With brick-and-mortar format on the bitter side of things, retailers are striving to stay afloat on the back of growth in the digital realm. Macy's is also adapting to changes in the retail ecosystem by bolstering its online capabilities. During the third quarter, the company’s digital sales surged 27% year on year, contributing 38% to total-owned comparable sales. The company is witnessing growth across all metrics including traffic, search and conversion. Also, customers have been responding well toward the company’s expanded omni-channel offerings such as curbside, store pickup and same-day delivery.

Macy’s well-chalked strategic initiatives to boost digital and omni-channel offerings are worth applauding. Apart from these, efforts to boost assortments and reduce costs are likely to continue supporting this Zacks Rank #3 (Hold) company in the forthcoming periods. Markedly, shares of the company have surged 88.3% in the past three months compared with the industry’s rise of 80.5%.