Apache Corporation (APA - Free Report) announces plans to form a new holding company — APA Corporation — following the approval of the company’s board of directors. The restructuring is expected to be completed by the first half of this year.

The new holding company will replace Apache (which trades on the Nasdaq stock exchange) as the public company once it is formed. Apache’s existing stake will get converted automatically on a one-for-one basis into shares of common stock of APA Corporation. Notably, it will maintain Apache’s ticker symbol and will acquire the latter’s Suriname and Dominican Republic subsidiaries.

Apache will be a direct subsidiary of the new holding company and is likely to remain holding its current oil and gas assets in the United States, subsidiaries in Egypt and the U.K., where it carries out its activities in the Forties and Beryl areas of the central North Sea. Moreover, the oil and gas producer is expected to maintain its existing business interests in midstream operator Altus Midstream Company (ALTM - Free Report) and Altus Midstream LP, which operates as a special purpose acquisition company.

It is to be noted that a holding company provides several advantages in managing risks, and offers financial and administrative flexibility. It enables firms to lower their tax bill, protect patents and diversify their unit’s operations efficiently. Importantly, the company’s action modernizes its operating and legal framework by making it more compatible with other companies, with subsidiaries operating worldwide.

Headquartered in Houston, TX, Apache is one of the world's leading upstream energy companies. The company’s shares have outperformed the industry in the past three months. The stock has gained 54.3% compared with the industry’s 51.5% growth. 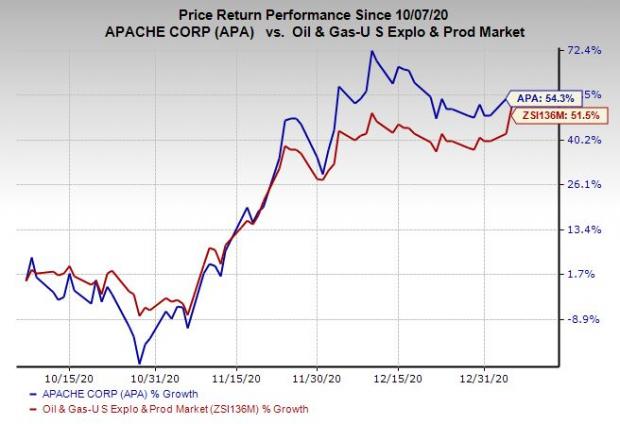