Per Myriad Genetics’ management, this recently announced agreement between the two companies will enable the combination of companion diagnostics with next-generation sequencing. This combination can be utilized to advance comprehensive genomic profiling of tumor samples and derive better outcomes in oncology.

For investors’ note, myChoice CDx test is CE Marked, which has also received the Japanese regulatory approval for use as a companion diagnostic with Lynparza (olaparib) for first-line maintenance treatment in ovarian cancer in conjunction with bevacizumab. Lynparza is a PARP inhibitor jointly developed and commercialized by AstraZeneca and Merck.

Myriad Genetics’ recent partnership with Illumina is expected to provide a significant boost to its Molecular Diagnostic Testing business on a global scale.

Rationale Behind the Partnership

The collaboration will help Myriad Genetics to expand the access as well as extend the reach of myChoice CDx through its services offering. On the other hand, the partnership will allow Illumina to leverage its sequencing instrument install base and knowledge from growing market adoption of its TruSight Oncology 500 next-generation sequencing assay. This, in turn, will enable it to develop and commercialize the globally distributed kits for the assessment of homologous recombination deficiency (“HRD”) along with other proprietary biomarkers.

Illumina’s management believes that the rising adoption of PARP inhibitor therapeutics for the broader HRD patient population is crucial for the partnership. This belief stems from Illumina’s anticipation that the future of healthcare will depend on molecular-based testing for better patient outcomes through standardized and better testing with myChoice CDx.

Given the market potential, the partnership seems to have been timed well.

Of late, Myriad Genetics has been witnessing a slew of developments in its business.

The company, this month, announced the receipt of its first reimbursement decision for the myChoice Diagnostic System, which helps determine whether women with ovarian cancer will benefit from the PARP inhibitor Zejula (niraparib). Notably, myChoice was approved by Japan’s Ministry of Health, Labour and Welfare in September 2020 as a companion diagnostic for this indication, whose reimbursement decision is now in effect.

Myriad Genetics had announced the expansion of its myChoice tumor testing in various European markets and China in November 2020. The same month, the company presented new data which demonstrated that Vectra testing and three additional biomarkers, combined with traditional risk factors, can predict the risk of cardiovascular events in patients with rheumatoid arthritis. The company also presented a study which showed that Vectra is a significant predictor for joint damage and is a better predictor than several tested subjective measures.

In October 2020, Myriad Genetics announced the successful completion of the method evaluation assessment for the EndoPredict breast cancer prognostic test by the German Federal Joint Committee. 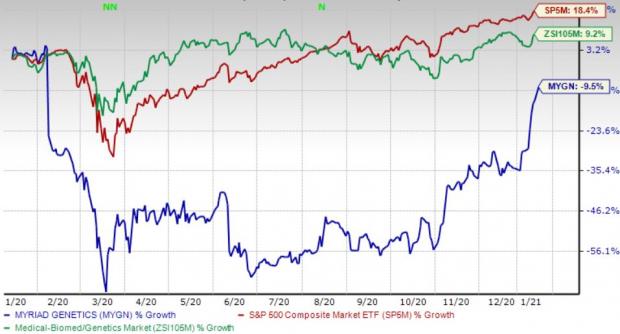