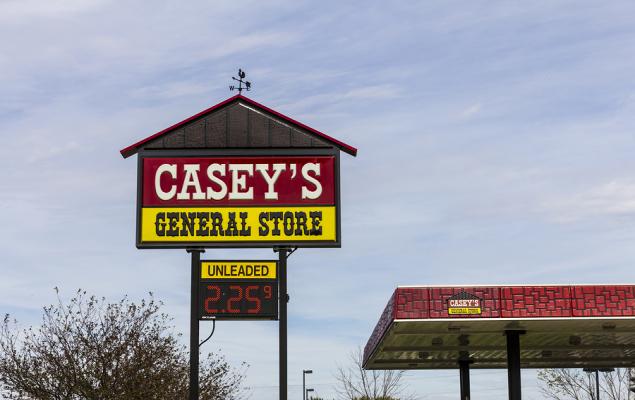 Casey's General Stores, Inc. (CASY - Free Report) came out with details regarding its third quarter-to-date (QTD) fiscal 2021 performance, up until Jan 8, before its participation in the ICR conference. Results were in line with the previously disclosed information during the company’s second-quarter earnings call. The company’s performance in the reported period reflects continued weakness in same-store fuel gallons. Moreover, rising costs related to the COVID-19 pandemic were a drag. Nevertheless, strong fuel margins and inside same-store sales were upsides. Let’s look closer.

For the QTD period, Casey's same-store fuel gallons declined in the low to mid-teens range compared with the same period in the third quarter of fiscal 2020. We note that the company has long been grappling with dismal fuel sales. During the second quarter, same-store fuel gallons fell 8.6% year on year, owing to lower consumer traffic stemming from the coronavirus pandemic.

Nevertheless, fuel margins were above 30 cents per gallon, which continued to remain higher than the historical averages. Effective retail pricing and procurements are likely to have aided fuel margins.

Management highlighted that the company continues to witness incremental costs associated with the pandemic. These include cleaning costs, increased sick and quarantine pay as well as higher team member appreciation pay. As a result, QTD operating expenses were up on a year-on-year basis. Rise in operating expenses is slightly higher than the percentage increase witnessed during the second quarter.

In respect of the pending Buchanan Energy acquisition, the company informed that it has received a request for additional information from the Federal Trade Commission (“FTC”). The request entails the extension of the anticipated closing date of the acquisition, which was initially expected to take place in late 2020. Casey’s informed that it continues to cooperate with FTC on this matter. Moreover it does not expect FTC’s review to have a material impact on the acquisition.

The Zacks Consensus Estimate for earnings in the third quarter is currently pegged at 96 cents, indicating a rise of 5.5% year on year. Strong fuel margins are likely to support the bottom line.

Shares of this Zacks Rank #3 (Hold) company have inched up 0.5% in the past three months compared with the industry’s rise of 2.2%.

Looking For Retail Stocks? Check These