Why You Should Retain Pacific Biosciences (PACB) Stock Now

Pacific Biosciences of California, Inc.  (PACB - Free Report) is well poised for growth, backed by a robust progress in its Sequel System as well as its sequencing technology. However, tough competition remains a concern.

Over the past three months, shares of the company have gained 207.1% compared with the industry’s growth of 5.6%.

The company with a market capitalization of $6.65 billion develops, manufactures and markets sequencing systems. Moreover, it has a trailing four-quarter earnings surprise of 28.6%, on average.

Let’s take a closer look at the factors that substantiate its current Zacks Rank #3 (Hold) status.

In October 2020, the company introduced the Sequel IIe System, the next instrument evolution powered by its SMRT Sequencing technology. The new Sequel IIe System makes HiFi sequencing accessible to any project where high accuracy, long read lengths and affordability are crucial. This development is expected to boost Pacific Biosciences’ flagship platform, the Sequel system.

In October 2020, the company inked a research collaboration deal with Invitae, focusing on investigating its clinically-relevant molecular targets for use in the development of advanced diagnostic testing for epilepsy. To support this collaboration, Invitae is widening the scope of its PacBio sequencing capacity to meet growing demand for clinical applications, which are dependent on highly accurate genomic information. In the same month, Children’s Mercy Kansas City, one of the nation’s top pediatric medical systems, entered into a collaboration with Pacific Biosciences. The aim of this deal is to further understand the most challenging pediatric diseases using PacBio’s highly accurate HiFi sequencing technology. 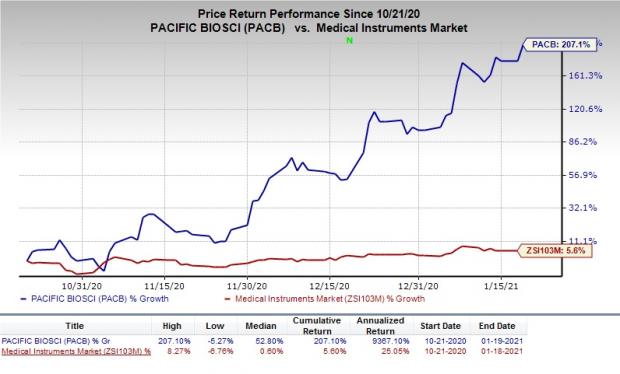 Cutthroat Competition: The DNA sequencing market is highly competitive due to the presence of established players like Illumina and Thermo Fisher Scientific Inc. Low-cost sequencing products from Illumina continue to gain traction, which is a headwind to the company. Moreover, Pacific Biosciences is a relatively small company in comparison to these second-generation sequencing technology firms.

For 2020, the Zacks Consensus Estimate for revenues is pegged at $75.1 million. The same for earnings stands at 17 cents per share, suggesting a growth of 130.9% from the year-ago reported figure.

Hologic has a projected long-term earnings growth rate of 17.4%.

PerkinElmer has a projected long-term earnings growth rate of 19.5%.

IDEXX has an estimated long-term earnings growth rate of 15.8%.