1. Delta, currently carrying a Zacks Rank #3 (Hold), incurred a loss (excluding $1.34 from non-recurring items) of $2.53 per share in the fourth quarter of 2020, wider than the Zacks Consensus Estimate of a loss of $2.43. Despite the sharp fall in passenger revenues, the top line outpaced the Zacks Consensus Estimate with cargo revenues increasing 10% and revenues from other sources climbing 6%. Apart from the revenue beat, another positive aspect of the earnings report in this coronavirus-ravaged scenario was that the daily cash burn halved to $12 million (on average) in the final quarter of 2020 from $24 million sequentially. Average daily cash burn in first-quarter 2021 is expected in the $10-$15 million range.

2 Alaska Air anticipates load factor for January in the 35-40% band. The expectation is worse than 43% recorded in December. The January projection also compares unfavorably with the load factor estimate of 45% for the December quarter. Total revenues for the current month are expected to decline in the 60-65% band. In the fourth quarter, the top line is anticipated to plunge 64% from the year-ago reported figure. In December, total revenues slumped 67%. Revenue passengers, which tumbled 70% in the month, are likely to plummet in the 65-70% range during January. The metric is expected to drop 67% in the to-be-reported quarter.

3. Despite the massive year-over-year decrease in Copa Holdings’ December traffic, the picture was brighter sequentially. Notably, the December decline in traffic was less than the November traffic decline of 74.6%. This reflects the gradual improvement in air-travel demand. Even the capacity contraction of 72.3% in November was greater than the December figure of 60.8%.

The gradual increase in travel demand was also highlighted by another Latin American carrier Gol Linhas (GOL - Free Report) as mentioned in the previous week’s write up.

4. The DOT terminated its review and approved the alliance between American Airlines and JetBlue. There were concerns that the tie-up might offset competition. Hence, the DOT nod comes with a series of conditions, which the airlines must comply with and ensure that the partnership offers benefits to customers without affecting competition. Some of these conditions include commitment to ensure capacity expansion and slot divestitures at New York’s John F. Kennedy airport and Washington, D.C.’s Reagan National Airport.

5. SkyWest’s (SKYW - Free Report) subsidiary SkyWest Airlines entered into a Payroll Support Program Extension Agreement with the U.S. Treasury Department by virtue of which, it will receive approximately $233 million in total under the Consolidated Appropriations Act of 2021. The financial aid is meant to help the airline cover its payroll expenses. In fact, SkyWest already received 50% of $233 million. It will receive the remaining half in the next month. Approximately $40 million of the funding will be in the form of a 10-year low interest unsecured term loan. SkyWest will issue warrants to the U.S. Treasury Department for purchasing approximately 98,815 of its shares at a strike price of $40.41.

Apart from SkyWest, the U.S. Department of the Treasury finalized agreements with carriers like Delta, American Airlines, JetBlue, United Airlines, Alaska Air and Southwest Airlines as it approved more than $12 billion in payroll support for passenger air carriers, which represent more than 95% of air capacity in the United States for supporting the airline industry workers. 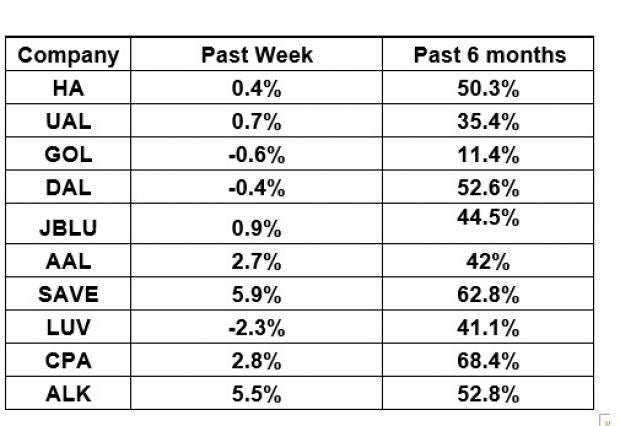 Investors will keenly await the fourth-quarter 2020 earnings report of Alaska Air Group, scheduled to be released on Jan 26