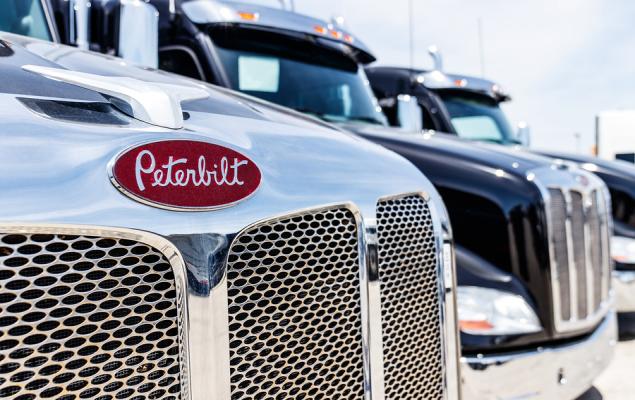 PACCAR (PCAR) Gears Up for Q4 Earnings: Factors at Play

PACCAR Inc. (PCAR - Free Report) is slated to release fourth-quarter 2020 results on Jan 26. The Zacks Consensus Estimate for the quarter’s earnings and revenues is pegged at $1.21 per share and $5.03 billion, respectively.

The trucking giant delivered better-than-expected results in the last reported quarter on higher-than-anticipated revenues from trucks and parts segments. Over the trailing four quarters, PACCAR beat earnings estimates on three occasions and missed once, with the average surprise being 10.4%. This is depicted in the graph below:

Our proven model predicts an earnings beat for PACCAR for the to-be-reported quarter, as it has the right combination of the two key ingredients. A combination of a positive Earnings ESP and a Zacks Rank #1 (Strong Buy), 2 (Buy) or 3 (Hold) increases the odds of an earnings beat. You can uncover the best stocks to buy or sell before they’re reported with our Earnings ESP Filter. You can see the complete list of today’s Zacks #1 Rank stocks here.

Earnings ESP: PACCAR has an Earnings ESP of +4.66%. This is because the Most Accurate Estimate for earnings is pegged 5 cents higher than the Zacks Consensus Estimate.

Zacks Rank: It currently carries a Zacks Rank of 3.

What Investors Should Know Ahead of the Earnings Release

With the auto industry recovery continuing in the fourth quarter, PACCAR is likely to have benefited from higher demand for Class 8 trucks. Importantly, the Zacks Consensus Estimate for the firm’s truck deliveries in the United States/Canada and Europe is pegged at 22,078 and 13,140 units, indicating an increase from the prior-quarter levels of 20,700 and 10,500 units, respectively.

PACCAR’s strong reputation for quality and leading brands — namely Kenworth, Peterbilt and DAF — is anticipated to have aided the company’s performance in fourth-quarter 2020. Investors should note that the consensus mark for revenues from the Trucks segment is pegged at $4,032 million, indicating a 15% increase from the prior-quarter level. Encouragingly, the consensus estimate for the segment’s pretax profit is $287 million, suggesting an improvement from $210 million recorded in the previous quarter.

Persistent growth in aftermarket parts — which are less cyclic in nature and carry high margins — is also likely to aid the firm’s fourth-quarter results. The Zacks Consensus Estimate for revenues from the Parts segment is pegged at $1,026 million, implying a yearly and sequential increase of 2.7% and 1%, respectively. The consensus mark for the pretax profit is pegged at $207 million, implying slight growth the year-ago figure of $205.2 million.

PACCAR is not the only auto company looking up this earnings season. Here are some other companies within the same space, which, according to our model, also have the right combination of elements to post an earnings beat in the to-be-reported quarter:

Tesla (TSLA - Free Report) has an Earnings ESP of +17.23% and carries a Zacks Rank #1 at present. The company is slated to release fourth-quarter 2020 earnings on Jan 27.

Gentex Corporation (GNTX - Free Report) has an Earnings ESP of +2.00% and carries a Zacks Rank #3 currently. The company is slated to release fourth-quarter 2020 earnings on Jan 29.

Cummins (CMI - Free Report) has an Earnings ESP of +0.76% and currently carries a Zacks Rank #2. The company is slated to release fourth-quarter 2020 earnings on Feb 4.

What's in the Offing for CACI International (CACI) Q2 Earnings?