TC Energy is displeased with Biden’s decision and expects the pipeline’s extensive regulatory reviews to get revoked. The company further decided to terminate more than 1,000 construction jobs in the weeks ahead.

TC Energy notified that the project’s suspension will result in several job cuts even when it intended to use renewable energy sources to power the pipeline system. Moreover, the company signed the local communities as equity owners and stated that the project would have been constructed under a Project Labor Agreement, involving the participation of the entire labor union.

The Keystone XL pipeline system has a carrying capacity of 830,000 barrels of oil export per day from Alberta to Nebraska, and about 200 kilometers of the pipeline has already been installed.

Earlier, the company announced its plan to wipe out more than three million tonnes of CO2 equivalent released every year in order to convince Biden that Keystone XL fits into his “Build Back Better” agenda. Importantly, the plan was expected to boost investments of more than $1.7 billion in communities along the pipeline route, thereby, creating 1.6 gigawatts of renewable electric capacity accompanied by job-creation in rural and local communities.

Project opponents claimed that the production and extraction of oil from oil sands will release more greenhouse gases, and the construction and operation of the pipeline involve risks associated with the water supply and the environment. As a result, the decision to suspend the pipeline construction was made, overlooking the vast economic and strategic advantages of the project.

As far as the project sponsor TC Energy is concerned, it is committed to increase its earnings and dividend payout through investments in critical energy infrastructure despite the Keystone setback.  The company will end the capitalization of the project’s costs, including interest during construction, and will evaluate the carrying amount of investments in the project, the company added.

On its part, apart from Keystone XL, TC Energy’s core business remains stable and is proceeding with secured capital projects worth $25 billion along with a broad portfolio of other high-quality opportunities under development.

Its shares have underperformed the industry in the past three months. The energy company’s stock has gained 7.4% compared with the industry’s 25.2% growth. 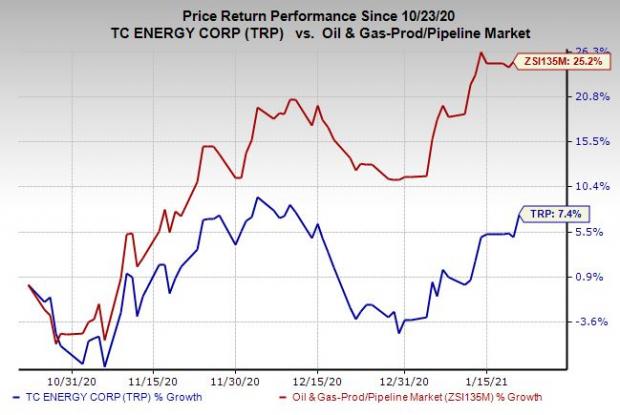 China Petroleum’s earnings for 2021 are expected to increase 25.3% year over year.

DCP Midstream’s earnings for 2021 are expected to increase 218.5% year over year.